The first day of play offs of the Sheru Classic Maha Mumbai Kabaddi League ended on a bang with three men’s  teams from each category entering the Maha Final for the 28th of August 2022.

The first match of the day, the Qualifier 1 from the sub-juniors category  saw Mumba che Maharaje make a stomping entry into the Maha Team Finals with the help of Om Kudale’s stellar performance.  The second finalist’s spot will be filled after the qualifier 2 match that will be happening on the 27th of August. 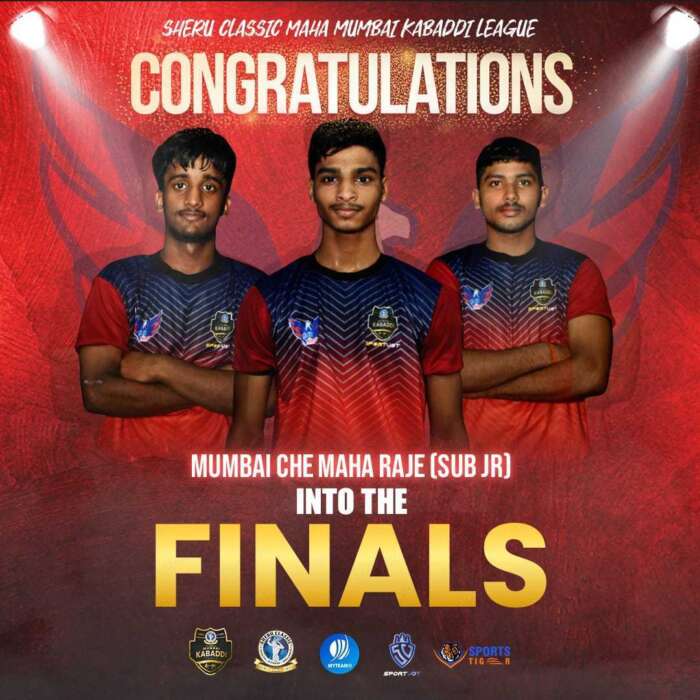 While the sub-juniors Mumba che Maharaje made it into the finals, the seniors category team lost their chance as the Mumbai Ultras Kabaddi Club overpowered with 44 points in the Eliminators , entering in the Qualifier 2. Namdev Iswalkar, a force to reckon with from the Sheru Classic MMKL, was given the player of the match award for this match.

The qualifier 1 for  juniors category got the most attention as the Borivali Bahubalis entered the finals by defeating the Raje Chandra Rao Warriors with 17 points. The eliminator match between the Gavali Dhurandhar and Namo Bharat Chembur finished all hopes for the latter as the Dhurandhars with Akshay Tawde’s all round performance got themselves into the second qualifiers.

The Raje Chandra Rao Warriors, though did not win the qualifier 1 match in the juniors category, the seniors team made it up with an amazing win against the Namo Bharat with the help of Rahul Takale’s outstanding game.

The second day of the playoffs is going to be elaborate and more exciting as the second qualifier matches take place. The day will kick start with four extremely special and inspiring Exhibition matches. SportVot in association with Shamsher Foundation has organised an exhibition for the specially abled athletes at the grand stage of Sheru Classic MMKL. The second and third exhibition match will be played between the staff teams of the University of Mumbai. The fourth and the final exhibition match is going to be for the kabaddi athletes of the yesteryear. These exhibition matches will be depicting the celebration of the spirit of sports in its true sense. These matches are a testament to the fact that the opportunities SportVot is trying to create for grassroots athletes have a larger purpose of bringing together the community to build up the country.

The Sheru Classic MMKL has so far delivered hundred percent sports entertainment, with best kabaddi , best teams and best players and the Finals are going to be a celebration of how the season has been as we find out the Maha Champion Teams. The finals will be happening at the Sports Complex, Mumbai University, Kalina Campus on the 28th of August, 2022, 3:00 pm onwards. You can also catch the LIVE action on the SportVot app.