Bengaluru, 7 Oct 2018 : Late goals in Hero ISL Match 9 before the first season break, kept the audience on edge of theior seats as it set up an unforgettable night of football at the Kanteerava Stadium on Sunday, with Jamshedpur FC holding Bengaluru FC to a 2-2 draw. 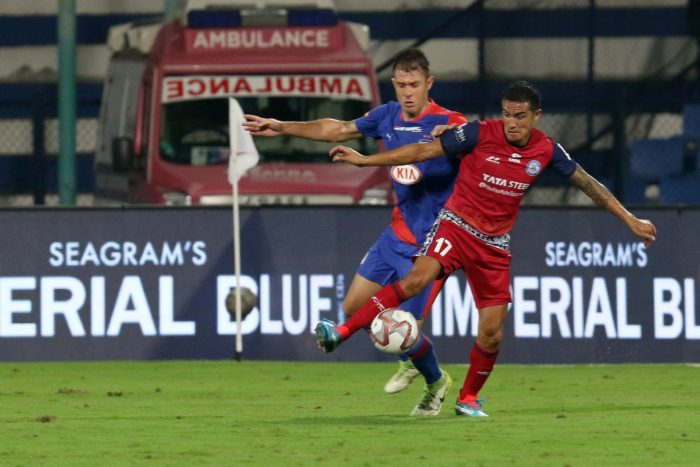 Nishu Kumar’s stunning volley at the stroke of half-time put the hosts ahead. Youngster Gourav Mukhi made history when he came on for Jamshedpur FC as substitute and scored on his debut to equalize. Sunil Chhetri’s header in the 88th minute was cancelled out by Sergio Cidoncha’s effort in added time (90+4).

Tim Cahill and Michael Soosairaj got their much-awaited debuts in the Hero ISL as Jamshedpur FC head coach Cesar Ferrando named an attacking side to take on last season’s finalists. Carles Cuadrat’s Blues were unchanged from their 1-0 win over defending champions Chennaiyin FC.

Ferrando’s side started the game on the front foot but the first real threat came from the home side 12 minutes into the match. Udanta Singh’s blistering pace allowed him to race past winger-turned-left-back Bikash Jairu into space on the right flank.  The winger’s cross, however, failed to reach Sunil Chhetri and was cleared by Tiri at the centre of the box.

Cahill looked to get in on the act by teasing a through-ball into space for Jerry Mawhmingthanga. The right-sided winger had time to pick out Soosairaj’s run into the box but the youngster’s cross was struck with too much force.

The Men of Steel piled up the pressure as the first-half progressed but their final delivery into the box lacked clarity. Mario Arques struck a dangerous free-kick at Gurpreet Singh’s goal but it sailed inches over the bar and had the goalkeeper’s eyes on its trajectory all the way through.

The midfield battle was proving to be difficult to win for both teams. The forwards were kept under watch and the ball was often played into the wide areas for crosses into the box.

Sunil Chhetri’s clever free-kick from the right flank was aimed at Xisco Fernandez who was waiting at the edge of the box. The Spanish midfielder’s sweet volley flew inches past the post and was an alarm signal for what was to come. 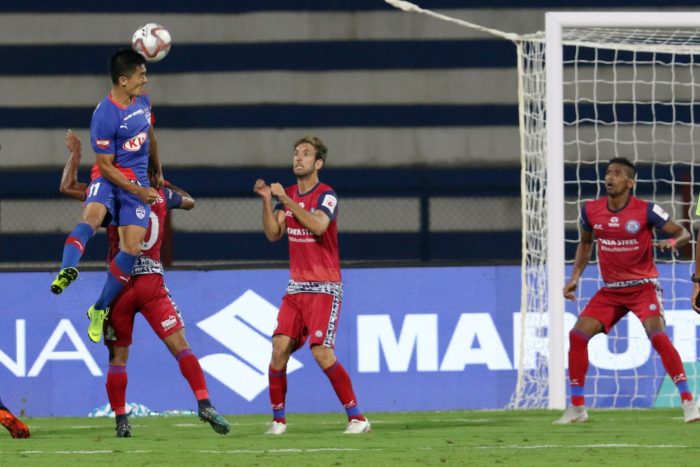 Two minutes later, another free-kick, earned by Miku and taken by Xisco, was headed clear initially by Tiri. The ball fell to Nishu Kumar outside the box who unleashed a stunning strike into the top left corner of the net, leaving Subhasish Chowdhury helpless and stunned.

Miku was proving to be a difficult for the Jamshedpur defence. He ran in behind the defence and squared a good through-ball across the face of goal, inviting Chhetri who failed to make a connection.

Ferrando replaced defender Gaikwad with Mobashir Rahman and the midfielder almost pulled off another long-range goal. A brilliant strike from outside the box was kept out of the top right corner of the net by the outstretched hands of Gurpreet Singh.

With 19 minutes left on the clock, 16-year-old forward Gourav Mukhi replaced Jerry to become the youngest ever player to make his debut in ISL. Ten minutes into his debut, the youngster produced a moment of brilliance to bring Jamshedpur back into the game.

Mukhi outmuscled Serran as he raced into the box to receive Maria Arques’ chip and slotted the ball past Gurpreet Singh for the equaliser.

Just as the Blues faithful thought they were done for the day, Harmanjot Khabra’s long ball into the box from the right flank was headed into the net by Sunil Chhetri to put the hosts back into the lead in the 88th minute. 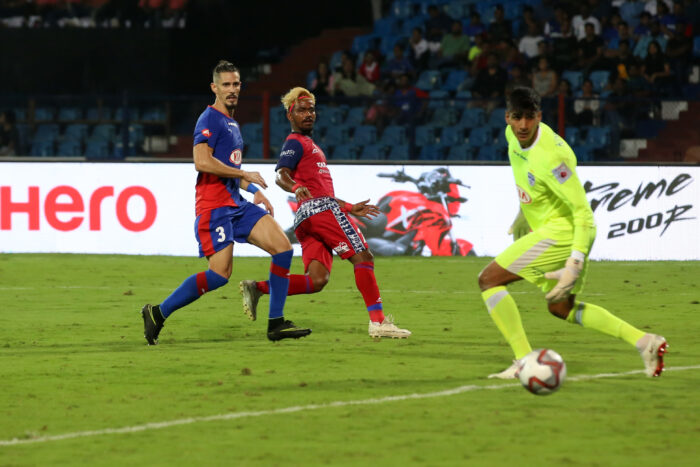 However, Jamshedpur FC showed gumption as they pulled one back right at the death. Arques’s cross into the box saw Cidoncha place his effort into the far post to ensure that they pick a crucial point away from home.