Chennaiyin & Kerala Cancel Each Other Out; Face Bleak Play-Off Chances

Chennaiyin & Kerala Cancel Each Other Out; Face Bleak Play-Off Chances

Chennai, 29 November 2018: The Southern derby between Chennaiyin FC and Kerala Blasters ended in a hard-fought goalless stalemate as both teams now face a bleak play-off chances in the Hero Indian Super League (ISL).

The southern giants, desperate for a win at the Jawaharlal Nehru stadium today, could not score a goal despite fashioning several chances to do so. With points split now, Chennaiyin climb to eighth in the league with five points from nine matches, while Kerala remain a spot above with eight points. 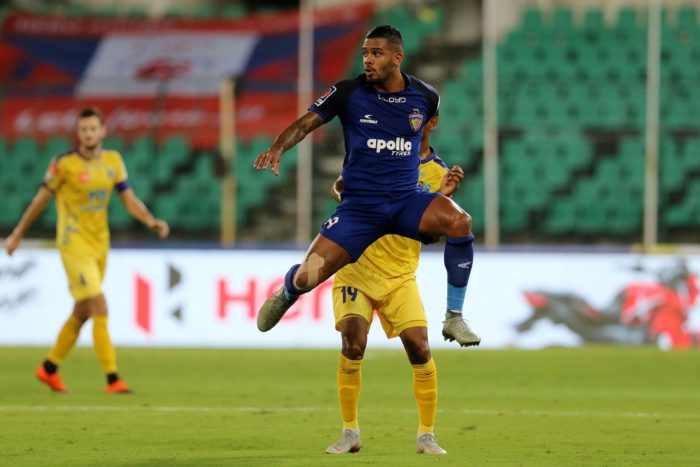 The home team started the high-voltage fixture with clear intent and created a couple of chances within the first six minutes. First, Raphael Augusto got the better of Halicharan Narzary on the right wing and fizzed a ball across which could not be turned in by Issac Vanmalsawma. Three minutes later, Andrea Orlandi headed a cross from Issac straight to Dheeraj Singh in the Kerala goal.

However, the game soon turned scrappy with neither team able to fashion a clear cut opportunity and possession changing hands frequently.

Kerala, for all their industry in midfield, could not really threaten the home team’s defence while Chennaiyin did have some half-chances. Jeje Lalpekhlua sent a shot high after pouncing on a loose ball inside the Kerala penalty box while Thoi Singh stung the palms of Dheeraj with a half-volley from outside the box in the 30th minute.

Thoi had a brilliant chance three minutes later when he won the ball in midfield and played Jeje in behind the defence. The Mizoram striker raced clear before squaring a ball for Thoi who failed to guide it in from close range, much to the displeasure of coach John Gregory. 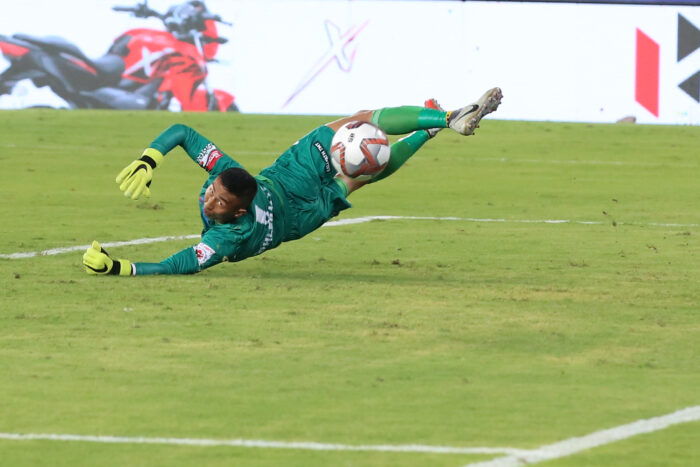 Kerala could barely get out of their own half as Chennaiyin attacked with vigour following that spell. However, a goal would elude them in the first half.

Shortly after the restart, Chennaiyin had another chance to take the lead. Raphael skipped past his marker into the box but his cut-back did not find a blue shirt as the chance went begging. 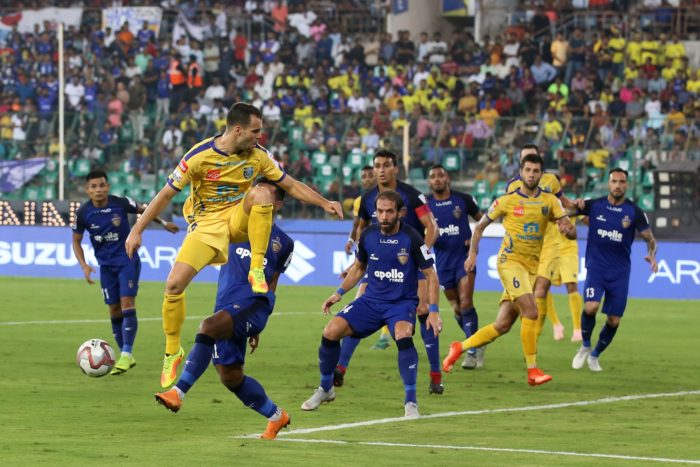 The visitors, however, started controlling possession thereafter and almost made it count when Keziron Kizito did brilliantly to find Sahal Abdul Samad inside the box. The youngster’s shot, however, was kept out by Chennaiyin custodian Sanjiban Ghosh. 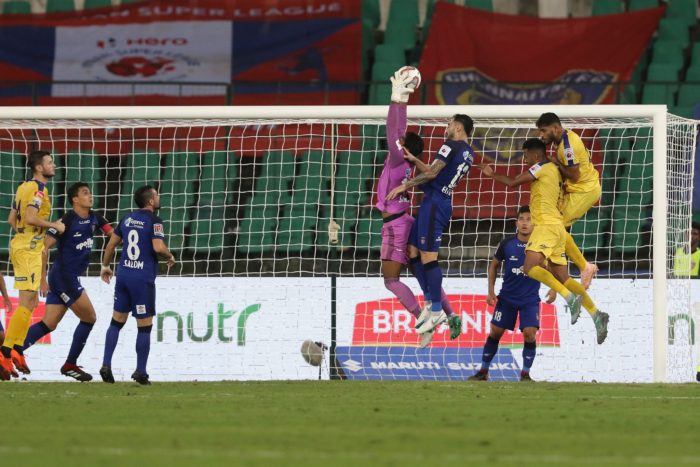 The home team soon gained momentum with Raphael making things happen for them in attack. A poor punch from Dheeraj in the 66th minute fell to Orlandi who saw his shot blocked. A few minutes later, a counter-attack initiated by Raphael saw Thoi send a ball into the box. But Orlandi blazed his eventual shot over.

Kerala came ever so close to a winner in the 80th minute when second half substitute Seiminlen Doungel was sent clear down the right from a quick counter. But Doungel’s grounder from the angle would come crashing back off the far post.

Even Sandesh Jhingan’s appearance as a substitute could not inspire a winner for Kerala.