UP Yoddha Squander Lead To Draw 26-26 With Telugu Titans

UP Yoddha drew with Telugu Titans in Vivo Pro Kabaddi League Season VI making it 2 draws in 2 days. UP Yoddha squandered their 8 point lead near the end of the match to draw with the Titans. Abozar Mighani was the sole defender to cause trouble to UP until the end when his corner partner Krushna Madane sprang to get holds. Telugu Titans didn’t get many raid points and thus performed more defensively. Sachin Kumar and Nitesh Kumar were the reason the Titans failed in raids many times by getting 3 and 4 tackle points respectively. Nitesh Kumar was handed the Orange Sleeve for 34 tackle points in Vivo Pro Kabaddi League Season VI as he became the new top defender.

UP Yoddha had a disappointing encounter yesterday after they gave away they gave away their lead to Bengal in the dying moments of the match and then drew it while Telugu Titans were starting without their captain Vishal Bhardwaj. Shrikant Jadhav started the match by getting Anil Kumar ushered to the bench in the first raid of the match. Sachin Kumar got a thigh hold on Mohsen Maghsoudlou to take the lead in th 5th minute Do-Or-Die raid for the Titans. 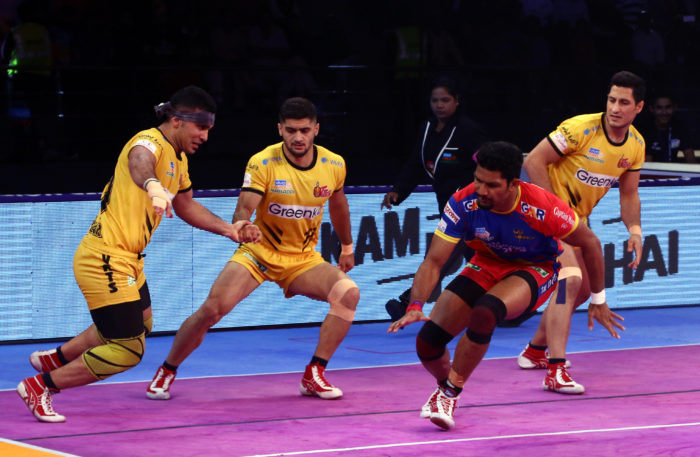 Both teams took a defensive approach as they continued to use Do-Or-Die raids to attack on the opponent. Telugu Titans tried to reduce the lead by getting a Super Tackle on Shrikant Jadhav in the 9th minute with Abozar Mighani and make it 8-5. They worked it out again with Anil Kumar stopping Rishank Devadiga in his tracks in the 12th minute raid and make it 9-7. This didn’t continue for long as the Titans were All Out in the 16th minute and help UP take the lead to 15-9. They continued this form into half-time as they lead the Titans by 19-10.

The second half saw both teams continue with their previous strategy as Titans got a point recovered by C. Manoj Kumar when he got Rishank Devadiga in a Do-Or-Die raid to make it 19-11 in the 22nd minute only to be neutralised in the very next raid by Shrikant Jadhav and make it 20-11. Nitesh Kumar caused tandem as he got Farhad Milaghardhan with a thigh hold and make it 22-11 in the 24th minute.

The 27th minute saw an injury as Abozar Mighani’s dash caused a head injury to Shrikant Jadhav after he was stopped by Mohsen Maghsoudlou with a double ankle hold. The 33rd minute saw Rahul Chaudhari finally get a point in the match and make it 25-17 after 9 raids out of which 5 were unsuccessful. His movements had a different game plan as he got 3 points in the next 5 raids. His performance helped Telugu Titans inflict an All Out on UP Yoddha after Krushna Madane got a strong waist hold on Bhanu Pratap in the 36th minute and make it 26-23. These advances towards UP Yoddha’s score by the Titans made UP nervous as they started bottling the match near the end. Mohsen Maghsoudlou’s 39th minute raid saw him get out of the hold of Nitesh Kumar and equalize to 26-26.