U.P. Yoddha Placed Second With 28 Points In Zone B Standings After 11 Games

U.P. Yoddha Placed Second With 28 Points In Zone B Standings After 11 Games

by Sachim Karekar
in Kabaddi, Pro Kabaddi, UP Yoddhas
0

8th November 2018; Greater Noida: U.P. Yoddha – The GMR group owned U.P. Franchise of the Vivo Pro Kabaddi League were placed at the second spot of the Zone B standings with 28 points in the 6th Vivo Pro Kabaddi League. Playing their final home game at the Shaheed Vijay Singh Pathik Sports Complex, Greater Noida, U.P. Yoddha had to face defeat against Bengaluru Bulls with the scoreboard reading 27 – 37. U.P Yoddha played five games at home and drew two against Bengal Warriors and Telugu Titans, while lost a total of three games with one against Tamil Thalavias and two to Bengaluru Bulls. 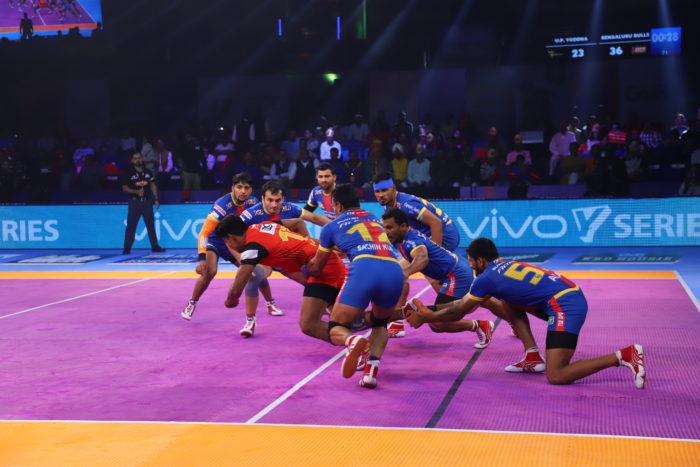 Todays game started with Shrikant Jadhav opening the account for the home team, however the bulls played a dominating game all through taking advantage of the Yoddhas defensive lapses. The Yoddhas showed intent of a comeback as they equalized the score to 5-5 after having trailed 2-5, but the bulls played with different intentions today. The bulls enforced an ‘All Out’ on the Yoddhas in the first half taking the scoreboard to 6-14 in their favour. U.P. Yoddha thereafter again showed intent to make a comeback and made a couple of good tackles but couldn’t really manage to reduce the margin by a lot in the first half. At the end of the first half the scoreboard stood at 11-20 in favour of Bengaluru Bulls. The second half had a similar storyline as Bengaluru Bulls kept invading into the Yoddhas both at offence as well as defence. The Bengaluru Bulls with this win has defeated U.P. Yoddhas at home for the second consecutive time.