The brave moment of the match belonged to Fazel Atrachali who continued to get tackle points despite being kicked in the face. Darshan Kadian showed real strength when he cleaned up the entire UP defence in one raid.

U Mumba got back to winning ways as a solid second half performance saw them outclass UP Yoddha 41-24. Surender scored seven tackle points for U Mumba whereas Fazel Atrachali got six points. Darshan Kadian and Siddharth Desai chipped in with 15 raid points combined. It was a disappointing game for UP raiders as they couldn’t handle the red-hot U Mumba defence. U Mumba remain at the top of the Zone A with 46 points.

Prashant Kumar Rai opened UP Yoddha’s account with a successful raid in the first minute. Siddharth Desai got into the act for U Mumba and scored two raid points to give U Mumba 5-4 lead. UP Yoddha responded with a super tackle in the 7th minute to lead 6-5. Both teams traded points in the next few minutes as UP Yoddha led 9-7 after 11 minutes. 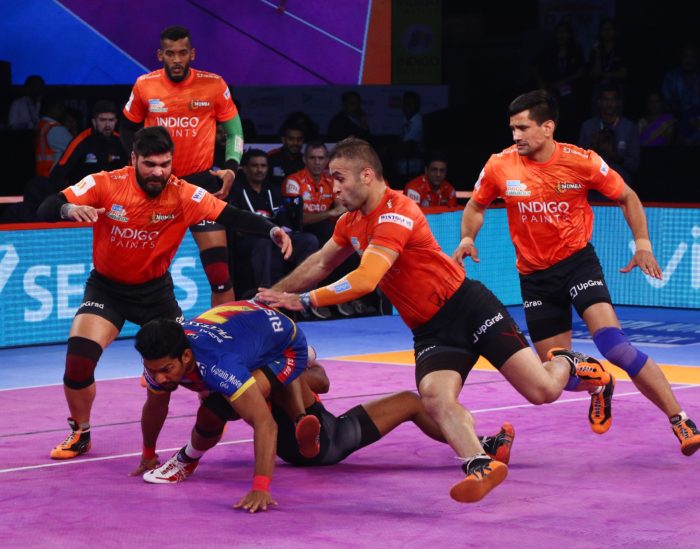 UP Yoddha got another super tackle as they sent Siddharth Desai to the bench and led 11-8. U Mumba made a comeback late in the first half as they inflicted the first all out of the match in the 18th minute. At the end of the first half, U Mumba held a slender one-point advantage as they led 15-14. Narender had an excellent first half for UP Yoddha as he attained a high five.

The second half saw U Mumba take charge of the proceedings as they inflicted an all out in the 24th minute to lead 20-15. Siddharth Desai got a raid point in the next minute as U Mumba extended their lead. Rishank Devadiga had a quiet game as he scored just one point in the first 25 minutes of the match.

Fazel Atrachali marshaled the U Mumba defence brilliantly and also reached the 200-tackle point landmark in Pro Kabaddi League. U Mumba led 30-21 after 35 minutes. Darshan Kadian made a brilliant super raid with four touch points as U Mumba inflicted an all out to lead 36-21. That one raid all but sealed UP Yoddha’s fate.

UP Yoddha tried to reduce the deficit in the last two minutes of the match but U Mumba were in no mood to relent and ran out comfortable winners in the end.