The brave moment of the match belonged to Pawan Sehrawat who scored a super raid to get Bengaluru Bulls back in the game. Surender showed immense strength and high fitness levels to lead U Mumba’s defensive charge.

U Mumba resisted a late fightback from Bengaluru Bulls as they won 32-29 in the table-topping Inter Zone Challenge match of Vivo Pro Kabaddi Season 6. It was a terrific first half performance by U Mumba that laid the foundation of the victory. Bengaluru Bulls just got six points in the first half as both their defenders and raiders struggled. Darshan Kadian scored 9 points whereas Surender got his second consecutive high five for U Mumba. After a quiet first half, Pawan Sehrawat top scored for Bengaluru Bulls with 8 points.

In the first three minutes, U Mumba raced into a 3-0 lead with two raid and one tackle point. Darshan Kadian powered through Ashish Sangwan as U Mumba led 5-0 and Bengaluru Bulls were reduced to just two men. In the sixth minute U Mumba inflicted an all out to lead 9-0. Bengaluru Bulls were struggling to find their feet against the aggressive U Mumba side. 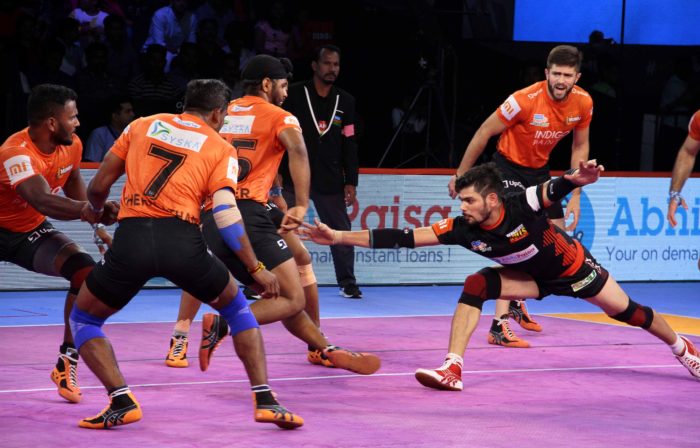 Rohit Kumar scored a raid point to open Bengaluru Bulls but it came in the 11th minute. The first tackle point for the Bulls came in the 13th minute. Darshan Kadian scored with a two-point raid in the 20th minute as U Mumba continued to dominate the proceedings. U Mumba went into the break with a healthy 11-point lead as the score was 17-6 in their favour.

Abolfazl Maghsodlou got three points for U Mumba in the 23rd minute as they led 20-7. U Mumba inflicted an all out in the next minute to extend the lead to 23-8. Pawan Sehrawat, Bulls’ star raider failed to get on the score sheet in the first 25 minutes.

Sehrawat finally got his first point as Bengaluru Bulls trailed 10-25 after 28 minutes. Sehrawat revived Bulls’ hope with a brilliant super raid in the 33rd minute as they inflicted an all out and cut the lead to just seven points.

Surender made a strong tackle on Pawan Sehrawat in the 38th minute as U Mumba led 31-25. U Mumba didn’t make any silly errors in the last two minutes of the match as they won 32-29.