U Mumba won the first match of their home leg in Vivo Pro Kabaddi League Season VI as they defeated Jaipur Pink Panthers. Siddharth Desai was kept on the bench but his absence was not felt. Abhishek Singh and Darshan Kadian caused trouble to Jaipur as they both got a Super 10. Fazel Atrachali also made some really great tackles as he got a High 5. Jaipur never recovered from an injury to Nitin Rawal. This was prominent as Jaipur conceded 4 All Outs in the game.

U Mumba are bumbling with positivity now as they will try to extend their already running 3 match win streak while Jaipur Pink Panthers were entering this match with a relief of finally breaking their losing streak. U Mumba continued to look like the dominating team. This was proved by the way Vinod Kumar was assisted by his team to drag Selvamani K. back from the midline region and get that tackle point in the 3rd minute to make it 2-1 in their favour. A great raid by Darshan Kadian in the 8th minute saw him see off Sunil Siddhgavali and Mohit Chhillar of the bench and make it 6-2. 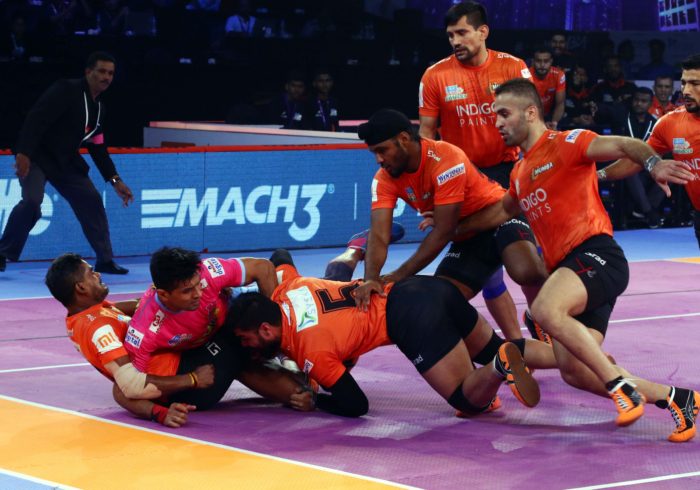 This lead to the first All Out conceded by Jaipur in the night as Young Chang Ko had to surrender to Abhishek Singh in the 9th minute to make U Mumba’s lead to 10-3. The day turned miserable for Jaipur as they lost Nitin Rawal to an injury to his right leg’s shin in an unsuccessful tackle on Darshan Kadian in the 9th minute. Fazel Atrachali continued to act like a rock as he short blocked Deepak Hooda in the 12th minute to make it 13-4. They conceded another All Out in the 14th minute with Sandeep Dhull conceding the surrender raid and make it 19-4. Jaipur continued to have a really bad day as they nearly conceded their third All Out before the half with the score being 26-8.

The second half was no different for Jaipur Pink Panthers as they conceded their third All Out in the 22nd minute of the match taking U Mumba’s lead to 31-9. A toe touch on Abhishek Singh by Anup Kumar saw Jaipur finally reaching the 10 point mark in the 22nd minute as the score was 31-10. Fazel Atrachali made his first mistake of the night in the 26th minute as he missed an ankle hold on Anup Kumar.

Young Chang Ko made a Super Tackle on Abhishek Singh in the 31st minute to make some shift towards reducing the lead as the score became 38-16. The next raid saw Deepak Hooda make the effort as well when he got Vinod Kumar and Rohit Rana to make it 38-18. Abhishek Singh got his first Super 10 of Pro Kabaddi League for U Mumba as he got twisted on his way back to avoid Sandeep Dhull and Anup Kumar’s dash’s effect and make it 43-19 in the 36th minute. This was followed by Darshan Kadian crawling to the midline as Young Chang Ko tried a waist hold from behind his back unsuccessfully to make it 47-19 as they conceded another All Out in the 37th minute. The match ended with U Mumba winning the match by 48-24 against Jaipur Pink Panthers.