Fazel Atrachali showed a lot of strength as he put on a number of successful tackles. The brave moment of the match belonged to U Mumba’s defence that made a critical super tackle in the first half.

U Mumba ended their home leg with a comfortable 36-22 win over Tamil Thalaivas. It was a solid defensive performance by the home team as they dominated Thalaivas’ raiders. Fazel Atrachali got a high five whereas in raiding department it was Darshan Kadian who got six points. Thalaivas’ defence got mere five points in the match and was the main reason for their downfall. Ajay Thakur top-scored for Thalaivas with seven raid points.

Darshan Kadian got U Mumba up and running with two raids in the first three minutes as they trailed 2-3. For Tamil Thalaivas, Ajay Thakur looked in fine touch at the beginning of the match. Siddharth Desai scored a raid point in the sixth minute as U Mumba trailed 3-5.

U Mumba forced a super tackle in the 10th minute to trail 7-8. It looked like a close match in the first half as both teams continued to trade raid and tackle points. In the 14th minute U Mumba inflicted the first all out of the match to open a 6-point lead. At the end of the first half, U Mumba led 18-12. 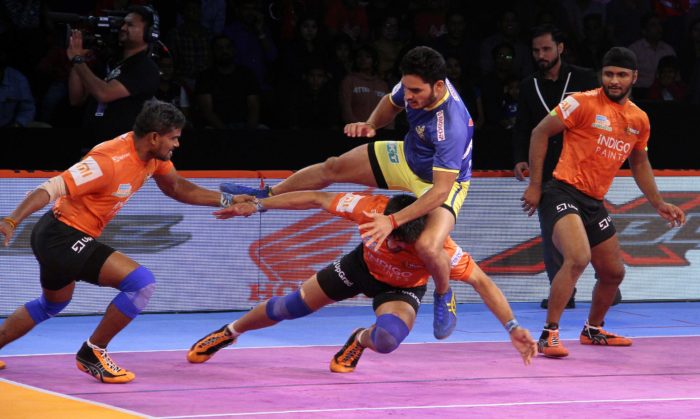 The second half saw U Mumba take charge of the match as they didn’t allow Tamil Thalaivas to make any sort of comeback. U Mumba defence held their ground on multiple occasions and didn’t let Thalaivas raiders settle in.

The game was all but over in the 30th minute when U Mumba inflicted another all out to open up an 11-point gap as they led 28-17. Ajay Thakur scored a couple of raid points but didn’t get enough support from his team mates. The defensive trio of Fazel Atrachali, Surender and Rohit Rana were in superb form all night as they piled on the pressure on Thalaivas’ raiders. The biggest difference between the two teams was their defence. Tamil Thalaivas’ defence had a disappointing game as they scored just five tackle points. Compared to that U Mumba had 17 tackle points

With less than two minutes to go, U Mumba led 33-21 and looked on course to end their home leg with a comfortable victory. In the end it was an easy win for U Mumba in front of their home crowd.