by Sachim Karekar
in Bengal Warriors, Pro Kabaddi, U Mumba
0

Riding on a solid all-round team performance, U Mumba beat Bengal Warriors 31-20 in the Inter Zone Challenge Week of Vivo Pro Kabaddi Season 6. The defensive trio of Fazel Atrachali, Surender Singh and Dharmaraj Cherlathan picked up 11 tackle points and tormented Bengal Warriors raiders throughout the match. Siddharth Desai was the top scoring raider for U Mumba as he scored 7 points. Maninder Singh had a quiet match for Bengal Warriors but still ended up being their top scorer with 5 raid points.

Both teams’ defence began brightly as they picked up tackle points to get going. Bengal Warriors held the early advantage as they led 5-2 after five minutes. U Mumba fought back in the next couple of minutes as Rohit Baliyan picked up a few raid points. It was all square at 5-5 after 10 minutes of action.

U Mumba shifted a couple of gears as they scored five points in three minutes to lead 10-7. Siddharth Desai sprung into action as the first half  was about to end and picked up three points in two raids to give U Mumba 15-9 lead. 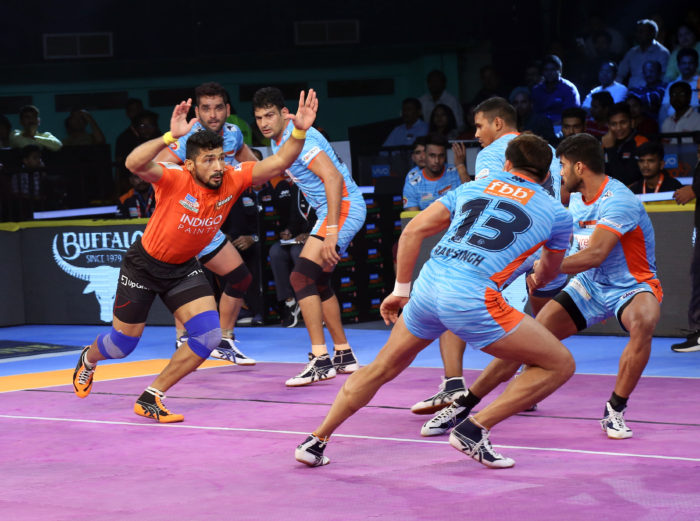 The second half began with U Mumba inflicting an all out to extend their lead to 18-10 in the 21st minute. Bengal Warriors’ star raider Maninder Singh picked up his  second point of the match in the 23rd minute as they trailed 12-21.

Surender Singh was a rock at the back for U Mumba as he tackled Bengal raiders throughout the match. With less than 10 minutes to go U Mumba led 24-13 and were on course to a comfortable victory.

Bengal Warriors’ raiders couldn’t get their footing throughout the match and with Maninder Singh struggling to get points their fate was sealed early in the second half only.

In the last five minutes of the match, U Mumba showed excellent game management skills and didn’t give many points to Bengal Warriors.