Manuel Lanzarote of ATK and Bartholomew Ogbeche of Northeast United FC shaking hands at tunnel during match 52 of the Hero Indian Super League 2018 ( ISL ) between NorthEast United FC and ATK held at the Indira Gandhi Athletic Stadium, Guwahati, India on the 8th December 2018 Photo by Saikat Das /SPORTZPICS for ISL

0
SHARES
76
VIEWS
Share on FacebookShare on Twitter
Guwahati, December 8: NorthEast United FC seem to have forgotten the art of turning difficult matches in their favour after playing out their third consecutive draw in the Hero Indian Super League (ISL).
After draws against Jamshedpur FC and Bengaluru FC, where they led till the closing stages of the game, NorthEast United were forced to share the spoils again, this time against ATK at the Indira Gandhi Athletic stadium here on Saturday.
NorthEast United have scored only one goal in their last three games but the point gained saw them reclaim the second spot with 20 points from 11 games. ATK are still sixth with 16 points from 11 matches.
The match got off to a sedate start as neither team found any sort of rhythm in attack. Though the home side saw more of the ball in the opening exchanges, they were unable to trouble the ATK defence which looked compact. 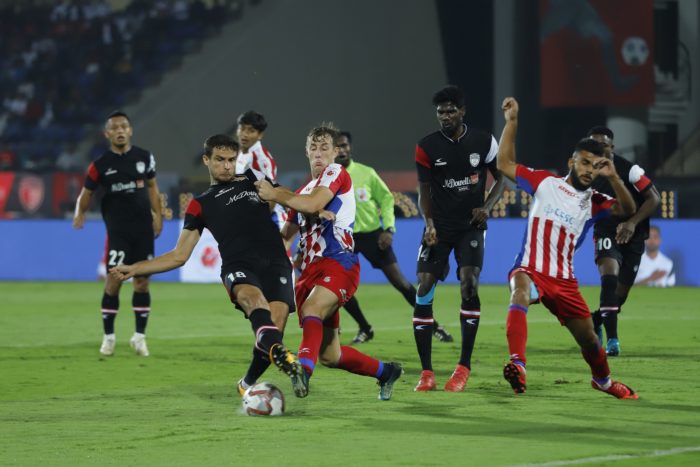 The first attempt on goal came in the 21st minute when Redeem Tlang showed good change of pace to work some space to shoot. However, his grounder was collected by an alert Arindam Bhattacharya in the ATK goal.
After a period of midfield slugfest, ATK forced their first chance when Everton Santos played in Balwant Singh with a shrewd lob but the Indian striker hit it straight at NorthEast goalkeeper Pawan Kumar.
The sloppy nature of the match continued for the rest of the half but the hosts were dealt a blow on the stroke of half-time when defender Mislav Komorski was stretchered off injured. Coach Eelco Schattorie was forced to send in Gurwinder Singh instead.
Just before the end of the half, ATK captain Manuel Lanzarote’s freekick looked set to be headed in by Hitesh Sharma but Keegan Perera made a crucial intervention to keep the scoreline intact. The slow-paced nature of the game continued in the second half as well with clear cut chances coming at a premium.
Even the substitutions made in the second half failed to provide the spark and the next real chance came in the 75th minute when Bartholomew Ogbeche unleashed a powerful effort from the edge of the box which went straight into the waiting hands of the ATK goalkeeper.
ATK, however, did have a couple of good chances towards the end. Everton’s shot from close-range after a freekick from Noussair El Maimouni was blocked late in the game, and with a minute left to be played, Andre Bikey saw a header from a Maimouni corner cleared off the line by Gurwinder as the match wound to a draw.
ShareTweetShare