Telugu Titans notched up their first win in the home leg as they beat Jaipur Pink Panthers 36-26 in the Inter Zone Challenge Week of Vivo Pro Kabaddi Season 6. It was a solid all-round performance by the Titans as their defenders and raiders contributed in the victory. Nilesh Salunke (8 points), Rahul Chaudhari (8 points) were the leading raiders whereas Abozar Mighani and Anil Kumar led the defensive charge. For Jaipur Pink Panthers it was a disappointing night as their defence struggled to contain Titans’ raiders. Deepak Niwas Hooda was the lone ranger for Jaipur as he scored 10 points.

Nilesh Salunke made a brilliant super raid in the 4th minute to give Telugu Titans 5-4 lead. Deepak Hooda responded with a two-point raid in the next minute to give Jaipur Pink Panthers 6-5 lead. The raiders from both teams picked up points in the next few minutes as it was all square at 8-8 after 10 minutes.

Rahul Chaudhari got a two-point raid in the next minute to give Titans 10-8 lead. Jaipur forced a super tackle in the 12th minute to take back the lead. The match was swinging like a pendulum in both teams’ favour. In the 17th minute the first all out of the match was inflicted by Titans as they led 16-13. Titans went into the break leading 17-13. 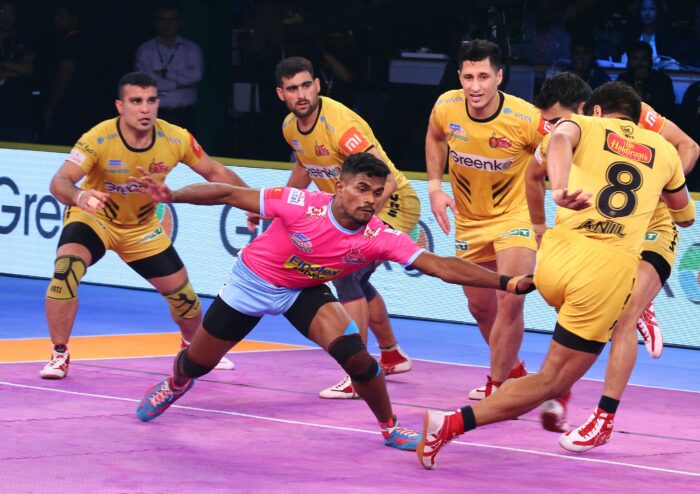 Telugu Titans were in command of the match as after 25 minutes they enjoyed a seven-point lead. Ajinkya Pawar tried to revive the Pink Panthers’ hopes with a couple of quick raids but Titans were in no mood to relinquish their lead.

With less than five minutes to Telugu Titans inflicted an all out to lead 31-20 and were assured of the first win of their home leg. It was a comfortable win in the end for Titans as they got the first home win.