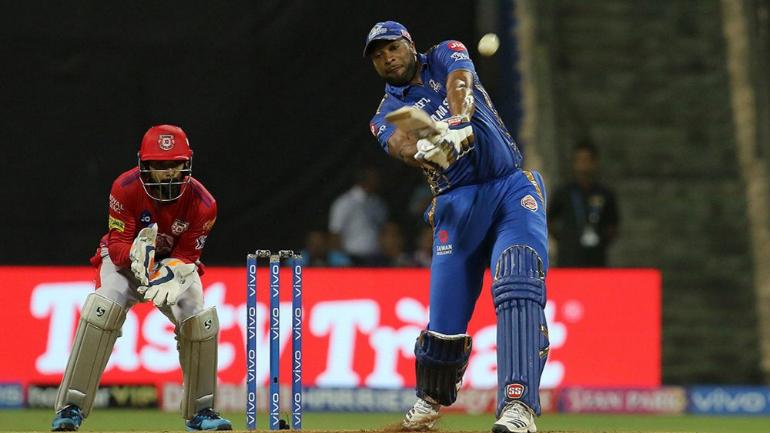 Mumbai Indians, with an aim of maintaining their winning streak at home hosted a determinant Kings XI Punjab squad on Wednesday night at the iconic ground of Wankhede.

The statistics favoured the visitors as the most successful away team to emerge victorious against the Mumbai franchisee, defeating them a total of 4 times in the history of IPL. Kieron Pollard was handed in the responsibility of leading the Blues at home after Rohit Sharma had to pull out of the game due to injury. Both teams entering into the match post registering victories against the previous edition runners-up, Sunrisers Hyderabad was an indication of a red-hot contest between the duos. Ravichandran Ashwin –led Punjab was put to bat first against Mumbai Indians by their new captain, Pollard as the Carribbean player termed dew as the factor for his decision.

Both KL Rahul and Chris Gayle opened the innings for Punjab against one of the favourite opponents of the season, MI as the duo had managed to cross the 50-run mark only once from their previous 5 innings which came against the Blue Paltan. The wicketkeeper-batsmen and the Universal Boss seemed to be in a great touch with sensational power-hitting dealing with boundaries against the pacers from Mumbai. Kings XI Punjab raced to the 100-run mark for the 1st wicket, which marked the 3rd best opening stand in the current season after the David Warner- Jonny Bairstow show for SRH. KL Rahul built on his innings after Gayle took the attack to MI bowlers. However, post dismissal of Chris Gayle, the middle order of Punjab failed to fire as none of the batsmen were able to surpass the single digit score. KL, however continued his dominating performance and carried his bat through to remain unconquered at 100, laced with six 6’s and as many 4’s to help Punjab register a giant score of 197. MI were handed the responsibility of registering the highest successful run-chase.

Mumbai got off to a bad start with its top-order batsmen back in the pavilion inside the first 9 overs. Mohammed Shami, Sam Curran and the skipper, Ravichandran Ashwin provided the necessary breakthroughs, picking wickets at regular intervals thereby making the task complicated for the home team. Kieron Pollard and Ishan Kishan had a tough job on hand with a steep mountain to climb, requiring more 138 runs from the last 66 balls. Sam Curran was able to bring his team back on track by dismissing the latter batsmen, who felt shy at the stumps despite a dive.  Joined in with the Pandya brothers at the other end, the mighty Carribbean continued to assault the bowlers with powerful hitting capability. “If its in the arc, its out of the park”- the statement by David Miller, which he made playing for the KXIP against RCB in 2013 was reflected by his opposition team-mate, Kieron Pollard raced to an unbeaten 40 runs off just 15 balls. With the equation being reduced to 70 off 36 balls, twin strikes from the pacer Mohammed Shami proved fruitful as Pandya brothers were back in the pavilion in the same over. Pollard accelerated the gears of his innings, having powerful answers to every kind of deliveries including that in the slots, full-toss, around the waists and even length ball. The aggressive all-rounder was successful to put the match in Mumbai’s grasp before signing off for 83 runs off just 31 balls.

Alzarri Joseph finished the proceedings for MI yet again after the heroic victory against SRH. Chasing down the final 2 runs off the last ball saw the Wankhede and the dug-out in a trance.

The victory helped Mumbai Indians to climb to the 3rd spot in the points table and register their 3rd consecutive victory. The team is scheduled to play their next couple of matches at home and will aim to extend their unbeaten run.

Various cricket fanatics turned onto Twitter to express their reactions from the match:-

Woah ! What a game. Pollard playing an innings to remember for a long long time on his captaincy debut #MIvKXIP