However, for the Indian Youth Teams currently playing and training in both the nations, the commonality is of epic proportions – an attempt to create a historic footnote in Indian football history. 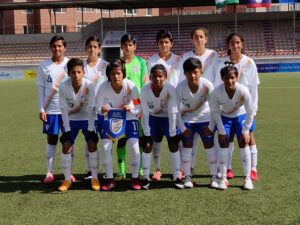 While the Indian girls have already begun their campaign and have won against Hong Kong and Pakistan, the Indian colts face Vietnam tomorrow (September 21) in their first group stage match. Although the teams maybe apart, hearts of each and every player in either team is wishing for history to be made.

The Head Coaches are no different. “We wish the boys all the very best for their matches in the AFC U-16 Championship Finals and hope that they will create history. The team has the potential to go a long way and I hope they secure qualification,” said Head Coach of the Indian U-16 Women’s National Team Firmin D’Souza.

“We have watched the girls win their first two matches and it was inspiration to watch them perform in the manner that they did,” informed Head Coach of the Indian U-16 National Team Bibiano Fernandes. “We wish them all the best and hope that they will make us proud.”

For the players the story is somewhat the same. “It feels like we are playing when we watch the girls team play,” said Vikram Pratap Singh. “We even watched the match against Pakistan and were happy when we won. Winning against Pakistan always has a different feel to it.”

“We know the potential of the boys’ team and we know they are capable of scripting history,” stated Aveka Singh. “We wish them all the best in their endeavour and hope that they will make us proud.”

Thousand kilometers apart, but united by a single cause.