ULAAN BAATAR, 20th September 2018 : Even after registering two back-to-back whopping victories in the AFC U16 Women’s Championship Qualifiers against Hong Kong and Pakistan respectively, the extreme climate in Ulaanbaatar has been ‘a real headache’ for Coach Firmin D’Souza. India will play hosts Mongolia in their third group league match tomorrow (September 21, 2018). 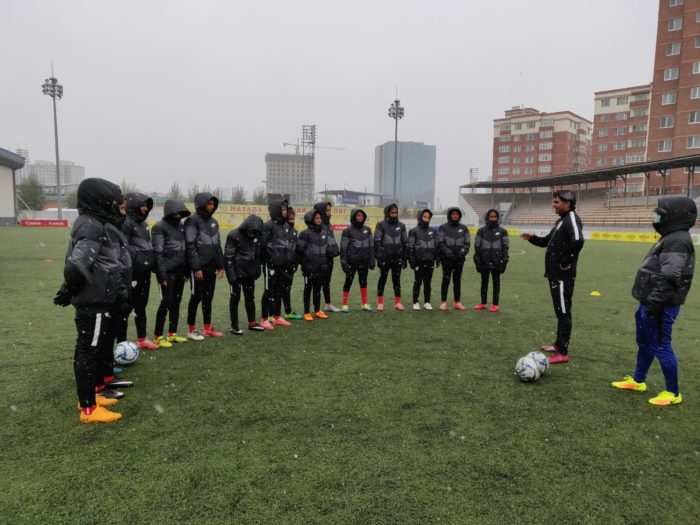 “Snowfall has been going on since last night along with heavy downpour in a few spells. It’s going to be extremely challenging for us to brave this weather condition when we got out against Mongolia”, he maintained.

“Although we have played two matches already, the weather condition has only got worsened since last night. Getting acclimatised to this is a real headache now.”

”But, we are here to represent the nation and we will take everything in a positive way.”

He added further: “Our primary focus is to stay mentally strong. Otherwise, we can’t counter these sort of difficulties.”

The meteorological department has predicted the mercury level to go below minus 3 degree Celsius in the next 24 hours with a few spells of rain.

On the other hand, Mongolia, having accumulated 3 points from as many matches so far, are fourth in the table and they’re going to play their final game in the first round of the qualifying stage against India tomorrow.

D’Souza who has followed their opponents closely over the course of the tournament stated: “They (Mongolia) play a good brand of football using every corner of the pitch. Their ground passing and movement during the game is really amazing. The first touch is something which they have adapted well and some of their players are very good dribblers as well.”

”They have an extremely talented midfielder who can fire it from long.”

“As of now, we have no major injury concern but one of our players is a bit unwell due to the extreme weather condition.”

As per the new nomenclature of the AFC U16 Women’s Championship, six group champions along with two best-second teams across the six groups will get a nod to the second qualifying round.

Eventually, four teams will join Korea DPR, Korea Republic, Japan and hosts Thailand in the finals which will be hosted by Thailand in 2019.

Firmin added: “When only one team is going to qualify to the next stage, you are ought to feel a little bit of pressure and nervousness at the back of your mind. Nevertheless, it doesn’t really affect once the game kicks off.”

India have smacked as many as 10 goals in 2 matches so far and D’Souza expressed that they won’t deviate from their free-flowing attacking football tomorrow, although they will need to maintain the shape at the back to come out with a clean sheet.

“We have scored 10 goals and our girls have shown their proficiency in the attack. While utilising that, we have to stay alert at the back also so that we don’t concede a goal. The result matters at the end of the day and we are hopeful to garner another positive one tomorrow.”

The match is slated to kick-off at IST 2.30pm and will be streamed live on Mycujoo TV.