The Current Crop Are Much Better That What We Used To Be At Their Age, States Gurpreet Sandhu

NEW DELHI, 17th September 2018 : There has been a lot of attention on the Indian U-16 Natioonal team specially with the exposure tours they have had. The colts being coached by Bibiano Fernandes have played 20 International Friendlies against U-16 National Teams since January 2018 and are presently gearing up for the AFC U-16 Championship Malaysia 2018 which kicks-off in Kuala Lumpur from September 20.

We spoke to Gurpreet Singh Sandhu who has been a part of past Indian U-16 National Teams and he feels the current crop are a whole lot better than what they used to be at their age. 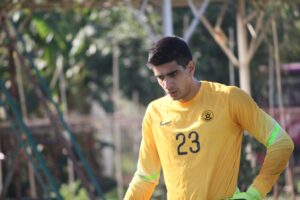 You have represented India at AFC U-16 level? How were those days?

Every single day we would learn something new about the game. There was hunger to grow and evolve as better players. That was the first time we started to receive good coaching.

Let us know about your days at AIFF Academy.

In comparison to previous batches, the current U-16 crop has getting a lot of international exposure. Does that make you jealous?

(Laughs). I would say, maybe a bit (laugh again). Jokes apart, it’s a very positive development. If we would have that much exposure what they have been receiving at the moment, who knows things would have been much different. They are very lucky and need to make the most of it.

But overall, I’m very happy that they are getting such opportunities and that youth Football is being taken so seriously. After all, they are our future.

Did you get any chance to have a look at them in any of the matches live streamed?

I have watched some of the highlights of their games. It is clear that quality wise, these boys are much better than what we used to be at that age. It makes me feel very proud. Things are changing and I am pretty positive.

There are quite a lot of boys in the U-16 team who idolise you.

I am humbled that they see me worthy of this. I am just a normal player who is trying to contribute to Indian Football as much as I can. We are all part of one big family.

The U-16 boys are playing Vietnam, Iran and Indonesia at the group stage. What would be your message to them?

I would like them to be humble and stay united as a Team. When you go in as a Team, you can do things which no one can ever imagine. I hope they win these games and make us proud. Good luck boys.