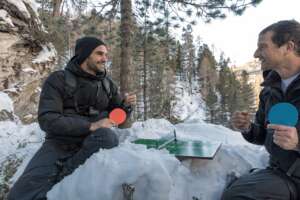 Mumbai, September 17, 2018 – Celebrities seem all too used to a luxurious lifestyle of pampering and 5-star hotels – but not when they’re with Global adventurer and best selling author Bear Grylls! Discovery channel India will premiere a new series titled Running Wild with Bear Grylls – a reality show where Grylls takes celebrities on a journey and tests their wilderness-survival skills. Big names include tennis Legend Roger Federer, Lena Heady from Game of Thrones, Don Cheadle, American actor Joseph Gordon and actress Uzo Aduba from Orange is the New Black. Running Wild With Bear Grylls premiers on September 20 at 21:00 hrs on Discovery Channel and Discovery World HD.

The first episode of the series will have Roger Federer venture into the Alps with Bear Grylls. It is a truly must watch experience – from discussing memories of raising two sets of twins, to a special game of ping pong, to dropping down into a gorge and eating fish eyeballs, fans will get to know Federer in a completely new way.

Bear Grylls sets the ball rolling at the beginning of the show, “From up here, these mountains are spectacular! But once you get on the ground, these towering cliffs and dense forests are a force to be reckoned with! Roger Federer better be ready for a match like never before!”

Federer, says, “I got an address, somewhere in the Swiss mountains – that’s all I know. This is like before a match, now, so I start to feel the pulse going boom-boom. I might look like a tough guy on the tennis courts, but I’m actually very scared of a lot of things in life. There’s gonna be scary moments for me, so (Bear) just hold my hand!”

“There’s gonna be some scary moments, I know that, so I do hope that the skill set from tennis comes into play in a big, big way today! I need to do other things than just play tennis all the time,” adds Federer.

On their journey to the Swiss Alps, Bear Grylls spots a half-eaten fish under the ice and explains the importance of eating eye-balls given they are rich in protein. “I always see these TV shows, of these people eating those crazy things; I’m like, I will never, ever, ever do it,” exclaims Roger. He does oblige Bear by eating or better swallowing the fish eyeballs.

“I have done a lot of things in life, but nothing like that. That was something else. This is something I’m never going to forget,” says an overwhelmed Federer while crossing a cliff.

Reacting to Bear Grylls observation that people would think that Roger slays opponents on field and he would be a natural who loves adrenaline and fear,” Federer, says, “No. Only on courts! I never do crazy stuff, so this is for me quite new, and challenging, in a way, because I’m a bit of a scared guy, you know, when it comes to these kinds of things.

Watch never seen before side of world famous tennis played Roger Federer on Running Wild with Bear Grylls from 20th September only on Discovery Channel and Discovery World HD.