Rahul Chaudhari showed his fitness levels as he powered through Pune’s defence on multiple occasions. The brave moment of the match belonged to Nilesh Salunke who produced critical two-point raids.

Abozar Meghani got the Telugu Titans up and running in the third minute with a strong tackle. Nilesh Salunke got a two-point raid in the next minute as Telugu Titans led 4-1. Akshay Jadhav got a bonus point and then Puneri Paltan followed with a super tackle in the 7th minute to trail 4-5. Puneri Paltan produced another super tackle in the 10th minute to tie the match at 6-6.

Telugu Titans inflicted the first all out if the match in the 12th minute to lead 11-7. Nilesh Salunke produced a ‘dubki’ in the 14th minute to give Telugu Titans 14-8 lead. Rahul Chaudhari showed brute strength as he made a two-point raid in the 18th minute as Telugu Titans led 17-8. Girish Ernak had a quiet first half for Puneri Paltan as he failed to get on the score sheet. Sandeep Narwal helped Pune force another super tackle in the last seconds of the first half as Puneri Paltan went into the break trailing 11-17. 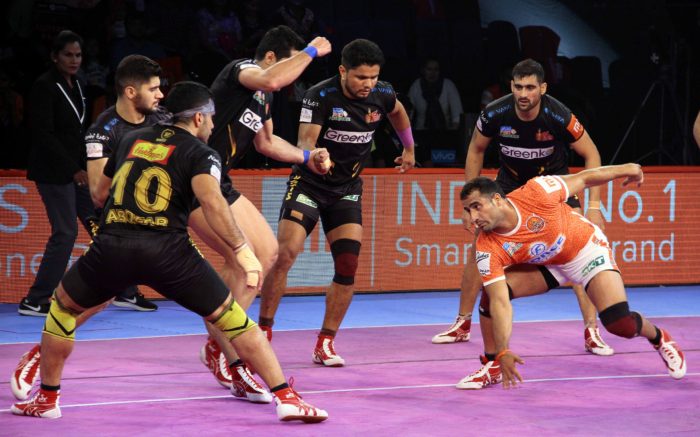 Girish Ernak picked up his first tackle point of the night in the 33rd minute as Puneri Paltan trailed 17-26. GB More got a point in the 37th minute but the gap was eight points for Puneri Paltan. Three points in a minute gave Puneri Paltan a chance to inflict an all out as they cut the lead to just three points.