Ajay Thakur displayed a solid show of strength as he ran through the Titans defence on multiple occasions. Athul MS’ crucial raid in the last five minutes was the brave moment of the match as it gave Thalaivas a five-point cushion.

Sukesh Hegde made a two-point raid in the first minute to give Tamil Thalaivas 2-0 lead. Rahul Chaudhari opened his account in the 2nd minute as Telugu Titans leveled the match at 2-2. After five minutes both teams were tied at 4-4 but a super tackle by Tamil Thalaivas tilted the balance in their favour as they went on a four-point run to lead 8-4. 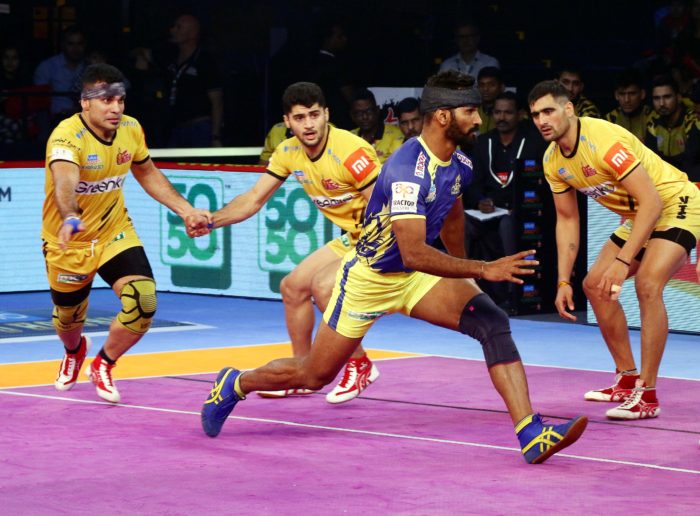 The Titans defence got into the act with two quick tackle points to reduce the lead to 6-8. Ajay Thakur’s successful raid in the 15th minute led to an all out on Tamil Thalivas as the Titans led 13-6. Thakur had a strong first half as he scored six raid points. At the end of the first half, Tamil Thalaivas led 18-10.

Telugu Titans made many attempts to mount a comeback but Tamil Thalaivas held strong. Rahul Chaudhari’s successful raid in the 35th minute gave Titans their 20th point of the match as they trailed 20-25.

A mistake by Abozar Mighani in the 37th minute gave Tamil Thalaivas 26-21 lead. Rahul Chaudhari missed a do-or-die raid in the 39th minute and with that all hopes for Telugu Titans evaporated. Two points in the last minute weren’t enough as Titans lost 23-27.