Sky Is The Limit For Us: Aditi Chauhan After Olympic Qualifiers Success In Myanmar

NEW DELHI, 16th November, 2018 : The Indian women’s football team ensured its place in the second round of the 2020 AFC Olympic Qualifiers on November 13 (Tuesday) after picking up one of the two automatic qualifying spots in their preliminary stage group consisting of Nepal, Bangladesh and hosts Myanmar.

The team picked up four points in their three games, with the entire quad rising to the occasion and getting the job done in the Burmese capital of Yangon. One of the key players behind the side’s success was none other than goalkeeper Aditi Chauhan, who was solid between the sticks in all three matches.

After two faultless performances in the draw against Nepal and win against Bangladesh, Aditi saved her best for the last as she was the team’s standout performer in their fighting 1-2 loss to higher-ranked Myanmar and produced a number of top-notch saves to keep the team in contention till the final whistle.

“We had a chance to pick up points against Myanmar. We conceded the last goal quite late and even had a chance in the end to score. Myanmar are ranked much higher than us but we never underestimated ourselves. The loss was disappointing but we are glad that we fought till the whistle and achieved our overall aim in the end,” Aditi said in a chat.

Under coach Maymol Rocky, the Indian team had travelled to Spain earlier this year for an exposure tour and in October, they spent three weeks in a preparatory camp in Mumbai to prepare for the Olympic qualifiers. Talking about the two experiences, Aditi said, “The exposure trip to Spain was really helpful, especially in our mental preparation. The tour really helped us assess ourselves, to see where we stand and what we need to work on in order to have a good result in the qualifiers.” 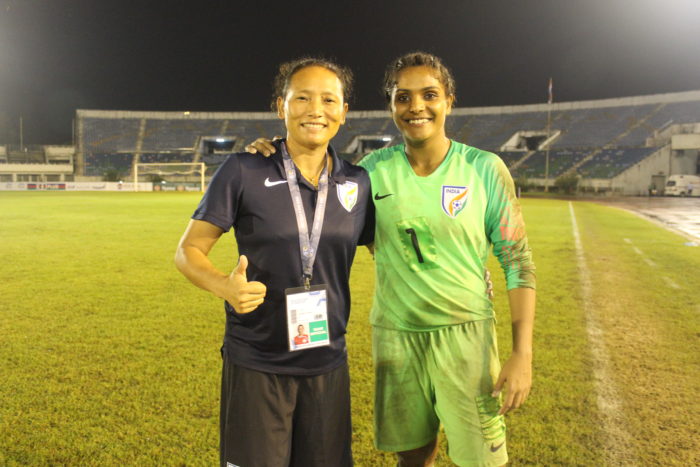 She added, “The Mumbai camp went very well. Right from the start, we had a clear aim – to qualify no matter what. Seeing the pool, it was also a realistic target for us and we were always positive over the course of the camp. We went to train daily with the same intention and worked with single-mindedness.”

The 25-year-old shot-stopper spoke about her personal objectives from the tournament as well. She said, “Personally, my aim was to perform my level-best for the team and make it to the starting lineup, especially after my injury. I’m really proud that I could be a part of this journey and contribute my bit in this result.”

One of the standout features of the Indian campaign was the incredible spirit in the team and the fact that the squad was made up by a core of young players. “Since the first match, we’ve always said that we believe in each other and trust each other. I’m very glad to be a part of this incredible bunch of girls who had such clear targets and clear motivation to perform their hearts out on the field,” exclaimed a proud Aditi.

She heaped praise on the young guns in the squad, saying, “The younger girls are great players as well as good and fun-loving human beings. They respect us (the seniors) as well as each other. They have been open-minded and adaptive, which helps us get them motivated, Most importantly, they understood what the team needs and understood the importance of this tournament for the future of the team.”

The former West Ham United Ladies keeper also spoke about the magnitude of her team’s feat in the wide context of the sport in India. “I’m short of words! We have created history and this achievement shows that we are on a rise. Women’s football has a bright future in India and this win will help increase interest in the women’s game and open more doors for us. The sky is the limit if we keep working this way – getting the required exposure and keeping our heads down to work hard,” she said, signing off.