Bengaluru Bulls continued their impressive run by winning their fifth match in Vivo Pro Kabaddi League Season VI and top the Zone B table. Rohit Kumar was the saviour for Bengaluru Bulls as he saved them from being All Out on 3 occasions after he was the only player left on the mat for his team. He tallied up 14 points for his team and take them to the victory. Prashant Kumar Rai had an average performance while Sachin Kumar and Nitesh Kumar tried their best to dominate the raiders of Bengaluru with 4 tackle points each.

UP Yoddha were entering the match after being thrashed by Tamil Thalaivas the previous night while Bengaluru Bulls were starting on a positive note after their close win over Patna Pirates. It looked like they had embraced and learnt from yesterday’s match as they dominated Bengaluru Bulls in the first few raids as they took a 5-0 lead on them by the 3rd minute. Bengaluru Bulls opened their score with a Super Tackle effort by Ashish Sangwan on Prashant Kumar Rai in the 5th minute to make it 5-2. 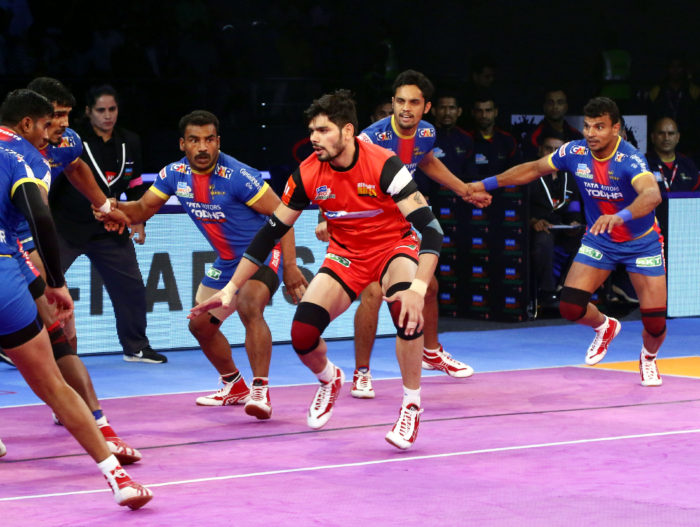 Bengaluru Bulls continued to use this tactic as they equalized with UP Yoddha by the 8th minute with another Super Tackle by Sandeep on Shrikant Jadhav to make it 7-7. UP Yoddha reduced Bengaluru Bulls to one man, Rohit Kumar, but his resilience saved Bengaluru from an All Out in the 11th minute with a Super Raid by getting Nitish Kumar, Sachin Kumar and a bonus point. He did this once again in his 14th minute raid to get Jeeva Kumar out cheaply and take the lead by 12-13. He couldn’t do it a third time as he ran out of time to reach the midline and hence conceded an All Out and make it 16-14 in favour of UP Yoddha. The half ended with UP Yoddha leading Bengaluru Bulls by 5 points at 20-15.

Bengaluru Bulls continued their great first half’s form to the second half to constantly reduce the gap. Rahul Chodhary had a bad night with entering the lobby and conceding a Self Out on 2 previous occasions but he made an impact in the 22nd minute to get a strong ankle hold on Shrikant Jadhav to start the on slaught and make it 21-16. They reduced it to a 2 point lead by the 25th minute with 22-20 on the score board.

The 29th minute saw Rohit Kumar finally get his first Super 10 of the season as he got Sagar Krishna ushered to the bench with a hand touch and make it 24-22. The 31st minute saw UP Yoddha concede an All Out after a great game and hand the lead to Bengaluru Bulls after Rohit Kumar got Prashant Kumar Rai and Sagar Krishna out and make it 25-28. Raju Lal Choudhary hammered Shrikant Jadhav with a great dash from behind his back and push him out of the mat in the 33rd minute and make it 25-31. Rishank Devadiga entered the match in the 34th minute to try and change the situation but failed as Bengaluru Bulls didn’t let the lead reduce immensely. Pawan Sehrawat got an amazing raid in the 39th minute to get Nitesh Kumar and Narender and thus get two strong defenders out of three out of the equation. 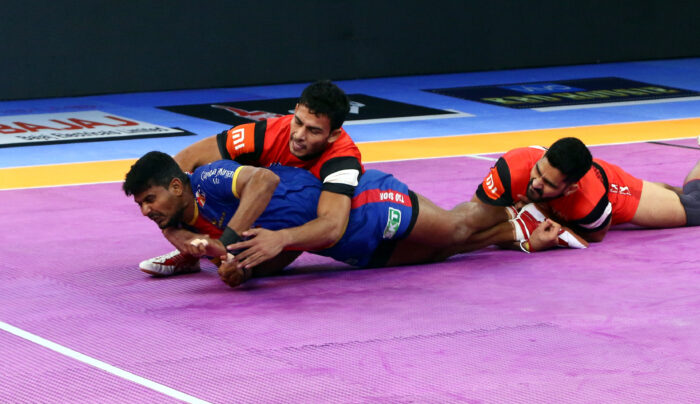 Highlights : U Mumba vs Puneri Paltan