Puneri Paltan won their sixth match in Vivo Pro Kabaddi League Season VI against Dabang Delhi K.C. This turned out to be a low scoring match as both teams grinded their lives to get points. Sandeep Narwal and Rinku Narwal caused the trouble for Delhi’s raiders who continuously made errors like stepping in the lobby or being timed out. Naveen Kumar was the highest scoring raider for Delhi with 6 raid points while Joginder Narwal tried his best to help his team win with 4 tackle points but it went in vain. Girish Maruti Ernak regained the Orange Band after claiming 2 tackle points to take his tally to 31 tackle points. 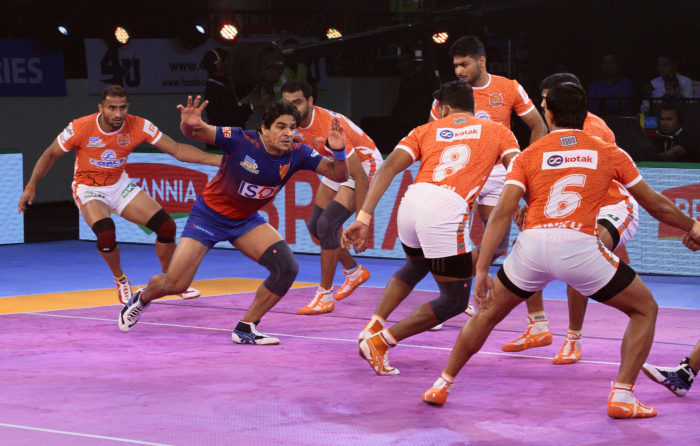 Puneri Paltan entered the match with mixed signals as they lost their star raider Nitin Tomar to an injury while the captain, Girish Maruti Ernak, finally made a return to the starting 7. The first half had its ups and downs for both teams. The first 5 minutes of the match saw both teams just attempting to inflict damage through Do-Or-Die raids with Pune being the successful team.

Delhi made a comeback with Chandran Ranjit’s 7th minute Super Raid which took Rinku Narwal, Sandeep Narwal and Ravi Kumar out of the equation. This led to a 9th minute All Out being conceded by Pune causing Delhi to lead 10-8. This lead was then handed back to Pune by Delhi’s star defenders in Monu’s 15th minute raid as Joginder Narwal, Ravinder Pahal and Vishal Mane got out cheaply to equalize the score to 13-13. Puneri Paltan then inflicted an All Out on Dabang Delhi K.C. in the 17th minute after Rajesh Narwal and Yogesh Hooda got out a raid earlier to More GB. The half ended with Puneri Paltan leading by 7 points with 15-22.

The second half saw both teams continue to use the same tactic of using Do-Or-Die raids. Pune used this to slow the game down as we saw Sandeep Narwal do while Delhi tried this to get tackle points. Naveen Kumar tried to make the game slightly interesting by getting touch points on Sandeep Narwal and Monu on the way back of his 22nd minute raid to make it 17-23. 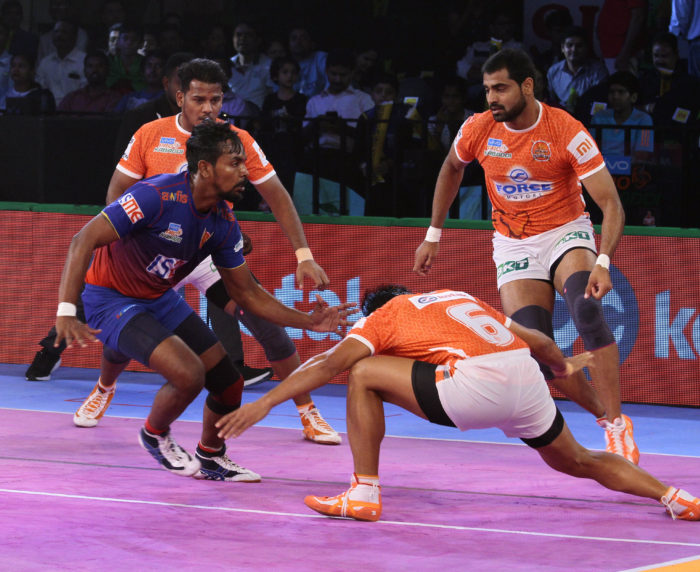 Meraj Sheykh was substituted to crack the Do-Or-Die raid tactic, which was a great idea by Delhi as he got Sandeep Narwal out with his famous back kick in the 29th minute. Even after so many efforts being put by Delhi, they continued to lose points as the raiders entered the lobby without a touch point regularly. Rinku Narwal and Sandeep Narwal created tantrums which Delhi raiders couldn’t handle. Joginder Narwal was the man of the moment for Delhi but he couldn’t inspire his team to a victory as Dabang Delhi K.C. lost the match to Puneri Paltan 26-31