The brave moment of the match came when Pardeep Narwal kept on playing despite suffering a hand injury. Naveen Kumar showed excellent fitness levels as he charged through Patna’s defence on multiple occasions.

In a nail-biting encounter, it was Patna Pirates who held their nerve to beat Dabang Delhi 38-35 in Inter Zone Challenge Week of Vivo Pro Kabaddi Season 6. Pardeep Narwal led Patna with an excellent raiding performance as he scored 16 points and was ably supported by Manjeet (8 points). For Dabang Delhi, Naveen Kumar was the star performer as he scored 15 raid points and almost led his team to a victory. Dabang Delhi would rue the missed opportunities as they were in control for most of the match.

Pardeep Narwal opened Patna Pirates’ account in the second minute with a successful raid. It was an evenly contested affair in the first 10 minutes with both teams traded raid and tackle points. Dabang Delhi scred a raid point through Rajesh Narwal in the 10th minute as they trailed 7-8. 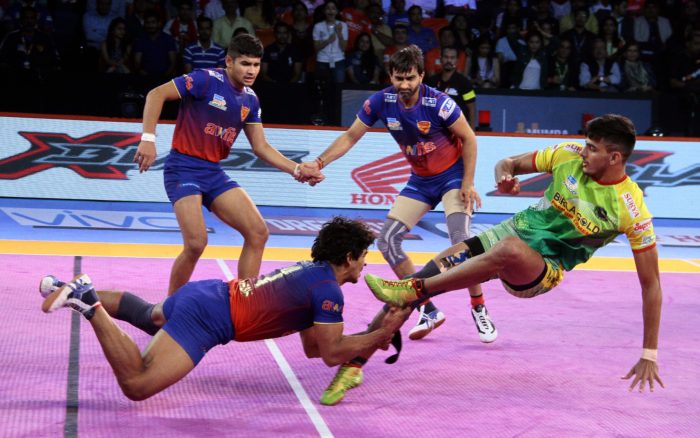 In the last five minutes of the first half, Dabang Delhi fought back with their defence getting two tackle points as they trailed 15-17. Patna Pirates were reduced to two men as Dabang Delhi ended the first half trailing by just one point.

Dabang Delhi inflicted an all out in the 21st minute to lead 21-19. Pardeep Narwal made a super raid in the 23rd minute to level the match at 23-23 for Patna Pirates. Dabang Delhi quickly took a three-point lead with tackles and raids as they led 26-23 after 26 minutes. Patna Pirates were being led ably by Naveen Kumar’s raiding endeavours throughout the match. With less than seven minutes to go, Dabang Delhi led 30-26.

Both Pardeep Narwal and Naveen Kumar kept picking raid points to keep their teams into the match. Dabang Delhi held the edge as they led 33-31 with just over three minutes to go. Pardeep got another raid point as in the 38th minute Patna trailed 32-33. Patna Pirates defence made a critical tackle to send Naveen Kumar to the bench as they leveled the match at 33-33. Patna inflicted an all out with just two minutes to go and led 36-33. 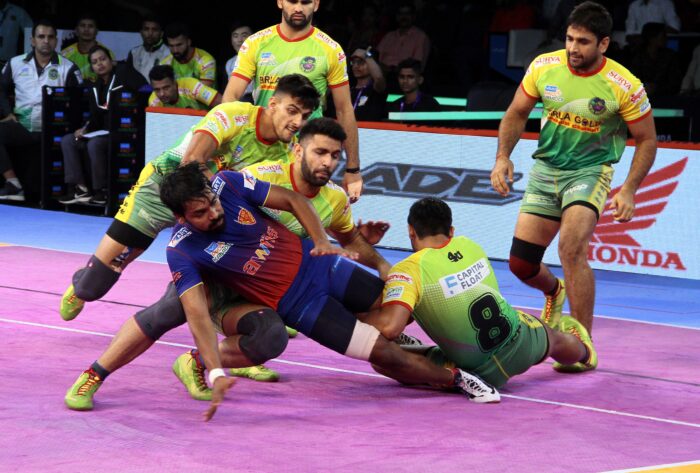