8
SHARES
74
VIEWS
Share on FacebookShare on Twitter
Guwahati, November 22:  NorthEast United FC have been impressive in the Hero Indian Super League with 11 points from their first six matches. They are just below the top four at the moment, but with a match in hand could quite easily make the jump.
There is one problem though for the Highlanders. They’ve won three matches so far and all of them have been away from home. NorthEast United will now look to break the home jinx as they host Kerala Blasters FC at the Indira Gandhi Athletic Stadium, Guwahati, on Friday. 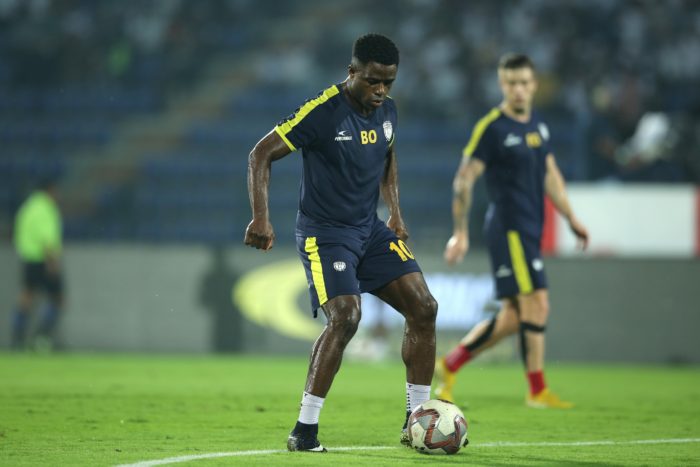 A lot would depend on Bartholomew Ogbeche, who has scored more than 50 per cent of the goals for NorthEast this season. When the Nigerian striker has got on the scoresheet, NorthEast have never lost a game.
Coach Eelco Schattorie has been boosted by the return of defender Mislav Komorski. He, however, did admit that one of his foreign players has suffered a season-ending injury.
“We have one foreigner injured who might not play for the entire season, but I will not name him now as it can be an advantage for the opponents. Barth (Bartholomew Ogbeche) had some injury but he is back. We have some Indian players injured but this is part of football,” said Schattorie.
Kerala Blasters, meanwhile, haven’t won a single game since their opening day victory over ATK. Coach David James has struggled to get his team going and the South Indian side is coming into the game on the back of two home defeats against Bengaluru FC and FC Goa.
Just like every other season for Kerala, they are struggling for goals. They haven’t created many goal scoring opportunities either, leaving James to put up a defiant front.
“Our performances have been decent enough except for one match which is the Goa game where we didn’t perform well enough. Goa are very good side. You have to accept on some occasions that some teams are better than you. In the other six games, including the Bengaluru game, we had decent performances. We always want to win games, want to qualify and win the ISL. We aim for three points,” said James.
Anas Edathodika has struggled for minutes this season and although he was brought into the starting line-up against FC Goa, his performance left a lot to be desired. Whether James opts to field an all-Indian defence against the likes of Ogbeche and Federico Gallego remains to be seen.
It will be a homecoming of sorts for Seminlen Doungel and Halicharan Narzary as they line-up against their former side.
“I think they are a very unpredictable team. Their strength is that they are a little opportunistic like they have players like Len Doungel and Halicharan Narzary who were in our team last time. They are good with dribbles, they play long balls. Defensively they have some weaknesses which I am not going to address. I studied the team well,” said Schattorie.
Can NorthEast get their first home win and propel themselves back into the top four or will Kerala Blasters get that much needed three points?
Share8TweetShare