Jaipur Pink Panthers win their 2nd match in Vivo Pro Kabaddi League Season VI against Haryana Steelers. Deepak Hooda was finally used as an all out raider and he proved his resilience by getting a Super 10. Nitin Rawal caused issues to Haryana’s raiders as he made some good tackles, assists to tackles and some really good and quick raids. Vikas Kandola tried his best to make some impact but Mohit Chhillar’s amazing performance sidelined him. Haryana Steelers have now lost both their matches to Jaipur

Jaipur Pink Panthers were entering this match after losing their last 4 matches and thus had a point to prove to their fans while Haryana, even though were having an average performance, planning on tending those burns from their last encounter where Jaipur defeated them at home. Jaipur started the raids and got a point from Anup Kumar who successfully attempted a bonus point in the first raid of the match. Deepak Hooda was blocked strongly by Sachin Shingade to equalize in the 2nd minute and make it 2-2. 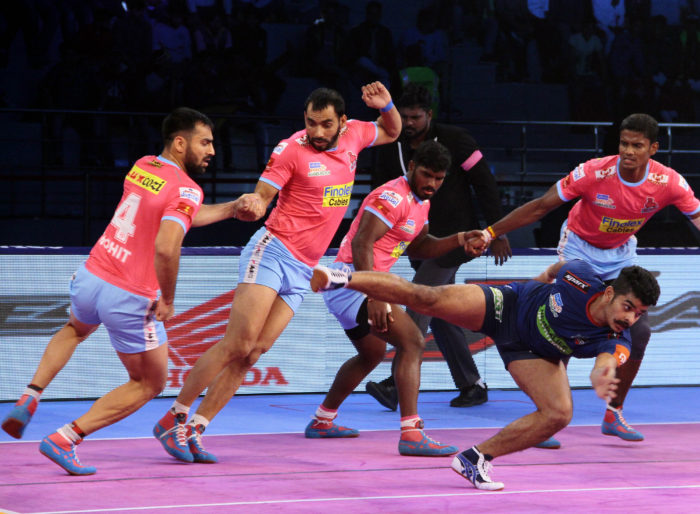 The regular mistakes made by Haryana caused Jaipur to take the lead and concede an All Out in the 9th minute to make it 11-6. It looked like Vikas Kandola had other plans as he constantly bothered Jaipur’s defense with regular bonus and touch points. Deepak Hooda got rid of two Haryana raiders in his 15th minute raid by getting Monu Goyat and Vikas Kandola. It looked like this could cause a lot of problems to them and thus concede another All Out but Naveen came in as a Super-Sub for Haryana. He got Nitin Rawal, Anup Kumar and after the review Sunil Siddhgavali and a bonus point in the 15th minute to flip the table and make it 16-13. They then continued this form and got Jaipur All Out in the last raid of the half to make it 18-20 in favour of Haryana Steelers.

The second half saw Haryana continue with the positivity of the first half and dominate Jaipur as Kuldeep Singh got Anup Kumar with an ankle hold to make it 18-23 in the 22nd minute. Jaipur stepped up to bring out a response as they got the Super Sub Naveen in the 25th minute Do-Or-Die raid when Young Chang Ko got him with an ankle hold to make it 20-23. Jaipur blocked Haryana from running away with the lead like Nitin Rawal and Mohit Chhillar blocked Vikas Kandola near the midline after a failed ankle hold by Young Chang Ko in the 27th minute to make it 22-24.

Mohit Chhillar continued to run nuisance to Haryana raiders as he got a strong block on Mayur Shivtarkar to inflict the All Out and make it 28-25 in their favour in the 30th minute. This All Out came in as a confidence boost for Jaipur as they then increased the lead slowly to 4 points by the 34th minute as Mohit Chhillar got a double thigh hold on Monu Goyat and make it 32-28. Nitin Rawal continued to cause trouble as an assister to tackles as he blocked Monu Goyat from returning to the midline this time after Young made a mistake and make it 34-30. Deepak Hooda got his first Super 10 of the season as he got a bonus point in the 38th minute and make it 35-30. Jaipur Pink Panthers win the match 38-32 against Haryana Steelers.