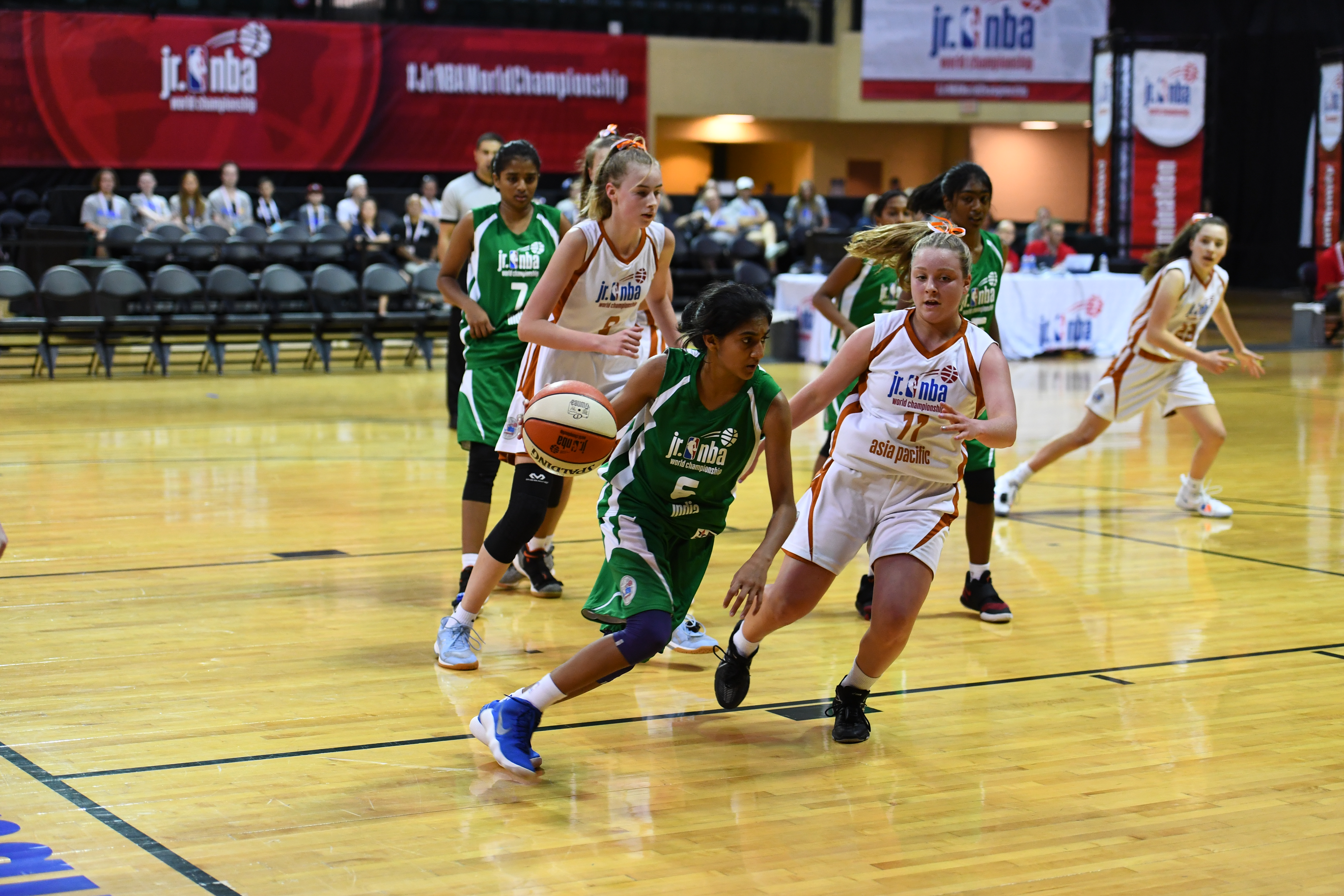 The 13-year old from Bengaluru had scored a game-high 17 points in her team’s impressive win over South America combined in Pool Play.

The award recognizes the players who are committed to giving back to those in need. These players understood the impact of the game beyond the court and embraced the opportunity to make a difference in the community.

The first-of-its-kind global youth basketball tournament took place from Aug. 7-12 and featured 32 of the top 13- and 14-year-old boys and girls teams from around the world.

The Central girls’ team from Kansas City, Mo. advanced to the Jr. NBA World Championship after winning the Central Regional tournament earlier this summer. After losing their first game of the week against the Southeast girls in pool play, head coach Sam Johnson and the Central team responded with six consecutive wins to take home the world championship. S’mya Nichols, Tasia Johnson, and Sania Copeland propelled the team’s offense throughout the week. Each averaged more than 10 points per game in the tournament and the trio scored a combined 45 points over Europe in the world championship matchup.

The Central boys’ team from Overland Park, Kan. also advanced to the Jr. NBA World Championship after winning the Central Regional tournament earlier this summer. Head coach Allen Skeens led the Central boys to a perfect 7-0 record in Orlando, including bracket-play victories against the Northwest, South, and Southeast to advance to the world championship. Standout players Mark Mitchell and Taj Manning averaged 19.3 points and 16.6 points, respectively, throughout the tournament. Mitchell and Manning combined for 35 points in the win over Africa & Middle East in the world championship match.

Prior to the championship games, seven-time NBA All-Star and 2018 Naismith Memorial Basketball Hall of Fame inductee Grant Hill hosted an awards ceremony and was joined by Silver and other presenters including Wade, Swoopes, and former Orlando Magic players and current Magic Community Ambassadors Nick Anderson and Bo Outlaw. Four awards representing the Jr. NBA’s four core values – Determination, Respect, Teamwork, and Community – were each presented to the boy and girl players who best represented the characteristics throughout the tournament. The winners were:

Determination Award
Girls: Sania Copeland, Central; Boys: Marouf Moumine, Africa & Middle East
Recognizes the players who consistently dedicated the time, energy and work ethic needed to excel both on and off the court. These winners were supportive of teammates, demonstrated a willingness to learn, exhibited strong leadership skills and always hustled on the court.

Teamwork Award
Girls: Juste Veronika Jocyte, Europe; Boys: Mark Mitchell, Central
Recognizes the players that exhibited strong communication and cooperation skills both on and off the court. These players understood how to listen, lead and work well with others.

Community Award
Girls: Sunishka Kartik, India; Boys: Harrison Stones, Asia Pacific
Recognizes the players who are committed to giving back to those in need. These players understood the impact of the game beyond the court and embraced the opportunity to make a difference in the community.

During the weeklong event, all 32 teams participated in activities designed to reinforce the Jr. NBA’s core values and provide the players with development opportunities and memorable experiences off the court. The activities included life skills sessions, Disney park visits, a community service project, and meetings with current and former NBA and WNBA players and coaches.