The Indian U-15 Women’s National Team progressed to the semi-finals of the SAFF U-15 Championship after defeating hosts Bhutan 1-0 at the Changlimithang Stadium in Thimphu, Bhutan. 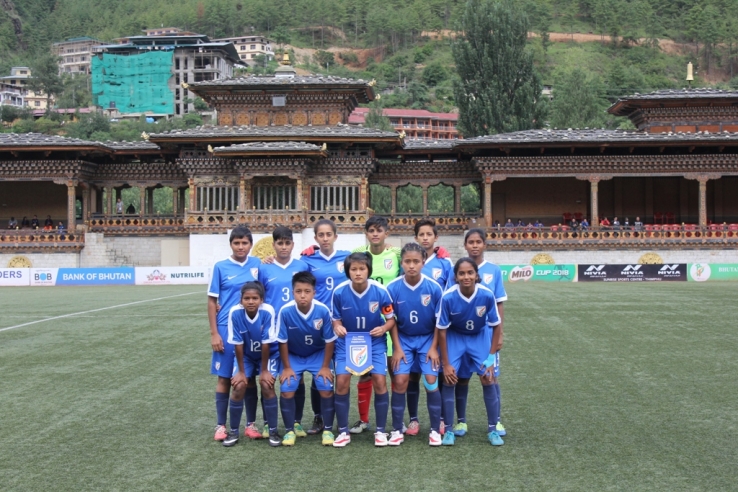 Shilky Devi’s 58th-minute strike proved to be the difference between the two teams in a match tightly contested where India rattled the bar twice. With this win, the Indian Women top Group A, winning both of their matches. The semi-finals of the SAFF U-15 Championship are slated to kick-off on August 16, 2018, and the Indian Women will face either Nepal or Bangladesh in the clash.

Although Bhutan started the game on an attacking note and dominated possession in the early minutes of the match, the Indian Women had an excellent opportunity to go ahead in the 13th minute when Kiran failed to make the most of her chance from inside the box.

In the 31st minute, the Indian Women rattled the woodwork after Sunita Munda found Kritina Devi on the flanks with some crafty work. Kritina’s first time effort from long range hit the bar and came back into play, only for her to shoot wide of the resulting ball. Five minutes later, Bhutan caught the Indian defence napping and hit the side-netting from inside the box to give the Indian Women a scare.

In the 55th minute, Avika Singh’s effort from distance rattled the crossbar but India had to wait little for the breakthrough that came three minutes later. Shilky Devi found the back of the opponent’s net with ease from inside the box with sheer composure in the 58th minute to give India the lead as the scoreline read 1-0.

The Indian Women pressed to double their advantage and came close when Shilky Devi’s shot missed the target. On the other end, the Indian defence had a busy day and mopped up Bhutan’s counter-attacks that came quiet frequently.

Bhutan committed bodies in attack to search for an equalizing goal but the Indian defence, compact, shut the gates tight and held on to edge out a 1-0 win over the hosts.