Haryana Steelers get their fourth win of the season in Vivo Pro Kabaddi League Season VI by defeating U Mumba. Vikas Kandola made the difference for Haryana Steelers with 15 raid points. Siddharth Desai tried his best to inspire his team by getting 10 raid points. Sunil made the defensive difference for Haryana Steelers as he got 5 tackle points in his 7 attempts. Vinod Kumar also tried to chip in with his All-Rounder skills by getting 6 points in total. This is now U Mumba’s second loss in the home leg.

U Mumba will be rearing to get back on track after last night they gave away the win in a single raid to Gujarat while Haryana Steelers will try to take revenge for the last 2 encounters these teams had where U Mumba completely annihilated them by 10 point and 27 point losses. Haryana Steelers started the match positively as they led U Mumba by 2 points without a reply. The first few minutes were then completely Siddharth Desai’s as he became the hero for U Mumba as he got Parveen in the 2nd minute and then Sunil and Naveen in the 5th minute to make the score 5-2. This was then followed up by him with a good raid to get Haryana Steelers All Out by getting Vikas Kandola, Parveen and Kuldeep Singh before crossing the midline to make it 10-3. 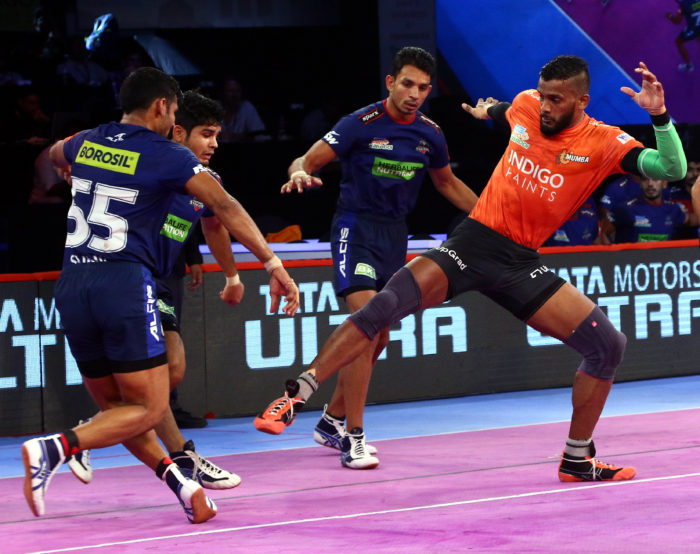 Vikas Kandola then took things in his own hands as he slowly got rid of U Mumba’s defense. He got Surjeet Singh and Rohit Rana in the 8th and 10th minute respectively to take the score to 12-7. This then led to U Mumba conceding an All Out as Vikas Kandola got Fazel Atrachali and Hadi Tajik in the 12th minute to equalize the score at 12-12. The 15th minute saw Fazel Atrachali get his first scalp of the match as he got a strong ankle hold on Naveen with an assisting dash by Surender Singh and Rohit Rana. Sunil then made his impact as he got rid of Siddharth Desai in the 16th minute as he stopped him from leap frogging above him by getting a strong double thigh hold to make it 15-15. The half ended with U Mumba leading Haryana Steelers by a mere 1 point lead of 17-16.

The second half had a similar story as it started with both teams neutralizing the other’s lead. It looked like Haryana Steelers finally started to get the lead as Sunil got an ankle hold on Siddharth Desai in the 27th minute to make the shoreline 21-22. The match was then injected with adrenaline in the 30th minute by Fazel Atrachali’s great tackle. Naveen tried a hand stand return to the midline to be safe but then Fazel pounced on him mid-air out of nowhere to catch him near the midline to make the score 23-23.

Vikas Kandola achieved his 4th Super 10 of Vivo Pro Kabaddi League in Season VI when he caught a rare mistake made by Fazel Atrachali to get a touch on him and make the score 26-24. This was followed by Siddharth Desai getting his 8th Super 10 of the season as he got Naveen ushered to the bench through a touch and make the score 27-25 in the 34th minute. A strong double ankle hold by Surender Singh stopped Monu Goyat in his tracks in the 37th minute to make the score 29-27. Naveen’s efforts on Siddharth Desai with a strong ankle hold helped Haryana take the lead in the dying moments of the match. U Mumba then lost the match because Haryana Steelers displayed their mental perseverance to finally win against U Mumba to win the match 31-35.