Haryana Steelers And Tamil Thalaivas In An Exciting 32-32 Tie

The brave moment of the match belonged to Manjeet Chhillar who kept his team in the match with a crushing tackle on Vikas Kandola. Amit Hooda showed immense strength as his tackles on Monu Goyat restricted the raider to zero points.

Haryana Steelers and Tamil Thalaivas played out a thrilling 32-32 tie in Inter Zone Challenge Week of Vivo Pro Kabaddi Season 6. Vikas Kandola’s heroics once again turned the tide for Haryana Steelers as he scored 14 raid points. For Tamil Thalaivas, it was a team effort with Sukesh Hegde (7 points), Ajay Thakur (6 points) and Manjeet Chhillar (4 points) combing to get 17 points. This was the second tie of the season between these two teams.

Tamil Thalaivas raced into a 4-1 lead with Jasvir Singh and Ajay Thakur getting a raid point each after four minutes. Thakur got another raid point with a flying hand touch in the fifth minute as Thalaivas led 7-2 Haryana Steelers got a tackle point in the eighth minute as they trailed 4-9. 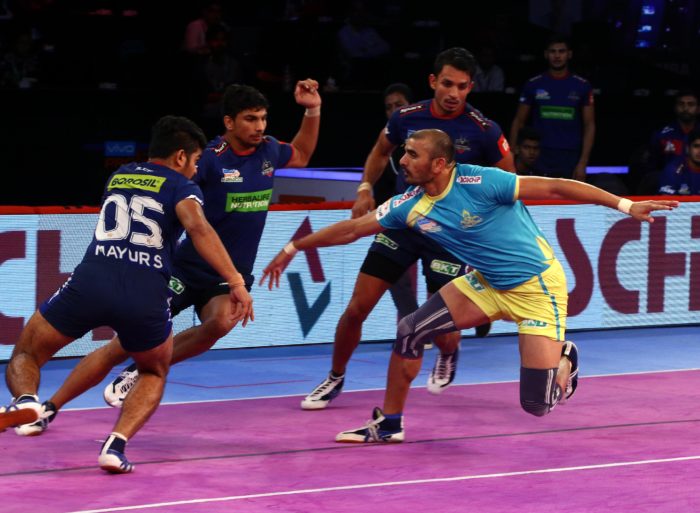 Haryana Steelers held a slender three-point lead after 25 minutes as the match was finely poised. Tamil Thalaivas cut the lead to just a point in 26th minute as they trailed 20-21. Ajay Thakur got another tackle point in the 28th minute as Thalaivas trailed 22-23.

Both teams weren’t ready to take many chances as they game progressed into tense finale. With just over five minutes to go, Haryana Steelers led 26-24.
Haryana Steelers made a silly error as Sachin Shingade stepped off the court as Tamil Thaliavas leveled the match at 27-27. Kandola and Hegde got a point each as both teams were tied at 28-28.

Tamil Thalaivas inflicted an all out in the 38th minute to take the lead at 31-29. Manjeet Chhillar made a strong tackle on Kandola as Tamil Thalaivas extended their lead to three points in the 39th minute. Vikas Kandola got a bonus point as it was a one-point game with less than 60 seconds to go. There was last-minute drama as Steelers asked for a review on an empty raid by Jasvir Singh but weren’t successful as the match ended in a tie.