Jeeva Kumar’s strong tackle in the 38th minute was the brave moment of the match. Shrikant Jadhav’s high fitness levels made him the best raider as he produced multiple crucial raids for UP Yoddha.

Gujarat Fortunegiants held their nerve to survive a second half comeback from UP Yoddha as they won 37-32 in Inter Zone Challenge Week of Vivo Pro Kabaddi Season 6. Gujarat Fortunegiants continued their unbeaten streak at home riding on a solid all-round team performance. Sunil Kumar got a high-five and Ruturaj Koravi chipped in with crucial four tackle points. Shrikant Jadhav scored 11 points for UP Yoddha but a lackluster first half performance let them down. It was a strong performance in the second half by the team for UP but they just fell short in the end. 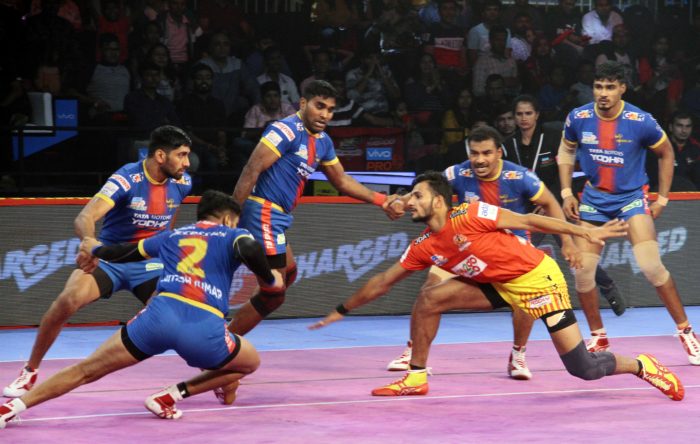 An all out followed and UP Yoddha trailed 4-12 and were looking out of sorts. Cheered on by a boisterous home crowd, Gujarat Fortunegiants increased the lead to 15-4 as Prapanjan made a two-point raid in the 9th minute. Two tackle points by UP Yoddha brought some respectability to the scoreline as in the 15th minute they trailed 8-18. At the end of the first half Gujarat Fortunegiants enjoyed a 10-point lead with the score 20-10 in their favour.

Shrikant Jadhav got UP Yoddha to a strong start in the second half with a three-point raid. UP Yoddha got their act together as they kept chipping in at Gujarat’s lead. Jadhav made another successful raid in the 25th minute as UP Yoddha trailed 15-22. UP Yoddha inflicted an all out as Jadhav made a super raid to level the match at 23-23 in the 29th minute.
Sachin made a two-point raid in the next minute to restore a two-point lead for Gujarat Fortunegiants. A crucial super tackle in the 33rd minute t as UP Yoddha once again leveled the match at 28-28.

Another super tackle in the 28th minute gave UP Yoddha 31-29 lead. Rohit Gulia scored two raid points in the last two minutes as Gujarat Fortunegiants trailed 31-32. Gujarat inflicted an all out in the 39th minute to lead 35-32. In the last five minutes of the match Gujarat scored 10 points compared to UP Yoddha and that proved the difference in the end.

Mohun Bagan Take On Real Kashmir In A Mid-Table Clash