Telugu Titans will be rearing with payback on their minds from their last encounter with Bengal while Bengal Warriors have had an average performance till now and would want to make their mark on the Titans again. Bengal started positively with Maninder Singh get a good hand touch on Farhad Milaghardhan in the first raid of the match. Baldev Singh being self out helped the Titans get the first points on board for them in the 2nd minute of the match. Jang Kun Lee got a bonus point in the 3rd minute to make it 3-1 but a great pursuit raid by Krushna Madane saw him ushered to the bench with the score becoming 3-2.

Maninder Singh got Rahul Chaudhari when he missed an ankle hold and Krushna Madane was ushered as well since he entered the lobby to make it 5-2 in the 4th minute. Both teams moved forward with a defensive strategy, working on their strengths. Abozar Mighani got his first scalp in the form of Maninder Singh in his Do-Or-Die raid as he dashed him out of the mat in the 7th minute to make it 6-4. A Super Tackle on Maninder Singh by Farhad Milaghardhan dashing him out of the mat helped them make it 12-10 in the 19th minute. The half ended with Bengal leading by 13-10. 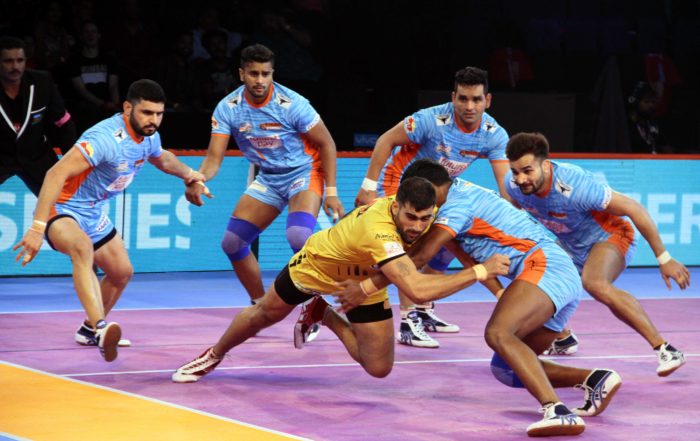 The second half saw Telugu Titans face the inevitable as they conceded the All Out when Farhad Milaghardhan stepped out of the mat without a touch being made and then Nilesh Salunke had to surrender to Ran Singh in the 22nd minute and make it 18-12. Rahul Chaudhari finally looked like getting his rhythm back as he got 3 touch points in 3 raids. This saw him get Ziaur Rahman, Adarsh T and Surjeet Singh respectively to make it 20-15 in the 26th minute.

Baldev Singh got a Super Tackle on Nilesh Salunke in the 28th minute to make it 22-16 and overturn the momentum in Bengal’s favour. It looked like Telugu Titans would’ve conceded another All Out in the 32nd minute if Abozar Mighani hadn’t played an important role in stopping Maninder Singh from crossing the midline because he had stepped off the mat. This converted a 5 point raid by Maninder Singh with an All Out converted into a 1 point raid with only Abozar leaving the mat. The 35th minute saw Mohsen Maghsoudlou make a Super Tackle on Maninder Singh to reduce the lead to 7 points with the score reading 26-19. Bengal Warriors then killed as much time as they could by crushing every single second from a raid. Bengal Warriors won the match against Telugu Titans by