Dabang Delhi have finally cleaned up the 3 match losing streak in Vivo Pro Kabaddi League Season VI with a win over Haryana Steelers. This was Vikas Kandola’s first match as captain since Monu Goyat was on the bench. Monu Goyat came off the bench to try and inspire his team as he got 11 raid points in 18 raids but couldn’t do so. Ravinder Pahal justified his nickname of “The Hawk” as he got 6 tackle points which included a strong Super Tackle in the end to seal the match. Meraj Sheyk’s Super Raid helped him get a few points off Haryana’s grabs. Naveen Kumar stood as Mr. Consistent as he got 9 raid points for Delhi in 15 raids.

Dabang Delhi K.C. are going through a slump as they have lost their last three matches while Haryana were starting the match with Monu Goyat on the bench and an extra defender in the starting lineup. Chandran Ranjit started the match with a bonus point for Dabang Delhi K.C. It was a slow start for both teams as they went for a Do-Or-Die raid approach, but it completely changed with Haryana Steelers’ Do-Or-Die raid. The 3rd minute saw Ravinder Pahal being assisted by Vishal Mane after he got a double ankle hold to pull Vikas Kandola from the midline and inject adrenaline to the match by making it 2-2. 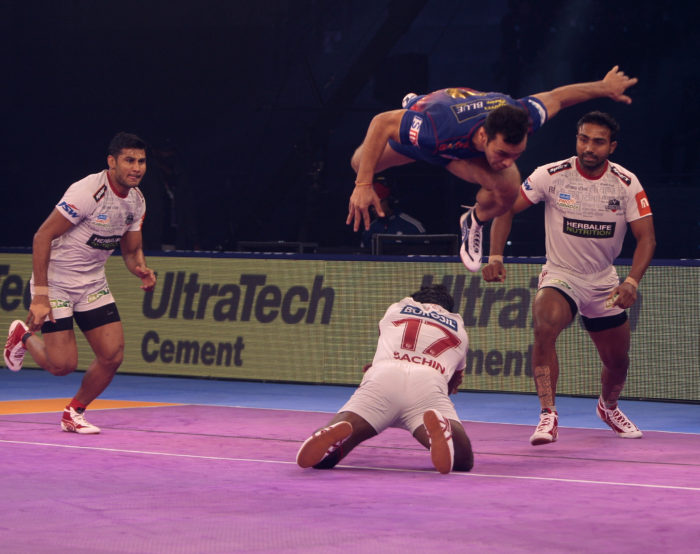 Delhi started to dominate the extra raider’s advantage after they got Naveen and Vikas in a raid and tackle in subsequent raids. Monu Goyat was brought into the mat in the 10th minute to become the raider for Haryana but he couldn’t stop Haryana from conceding an All Out in the 12th minute to give Delhi a 5 point lead with 7-12 on the scoreboard. His presence worked a little late as Haryana slowly but surely reduced the lead. Meraj Sheyk on the other hand leaped over Sachin Shingade to prove everyone who brought this technique to Pro Kabaddi League. Sunil got a strong chain hold on Naveen Kumar with Monu to stop his leaping effort and make it 11-13. They then inflicted an All Out on Delhi in the 18th minute to flip the table and take the lead by 16-15. The half ended with Haryana Steelers taking a 4 point lead on Delhi with 19-15.

Dabang Delhi made a Dabang impact on the second half by picking up 10 points in the first 5 minutes of the half. Meraj Sheyk got a Super Raid on Haryana in the 24th minute by getting Kuldeep Singh, Sunil and Naveen, keeping only Sachin Shingade on the mat for Haryana and making it 19-21 in favour of Delhi. The next raid saw Delhi inflict the All Out and make it 20-24 in the 25th minute.

Vishal Mane was the stronghold for Delhi as he dashed on the raiders of Haryana and push them out of the mat like he did in the 31st minute on an unsuspecting Naveen to make it 23-30. Haryana started to creep towards Delhi’s score as Monu Goyat got Naveen Kumar while also noticing Ravinder Pahal enter the lobby without a touch already being made. This reduced the gap to 5 points in the 35th minute to make it 28-33. Joginder Narwal getting a strong dash on Vikas Kandola’s 38th minute Do-Or-Die raid helped them get back the momentum towards them. Ravinder Pahal sealed the match with a strong Super Tackle on Monu Goyat to make it Delhi as Dabang Delhi K.C. defeated Haryana Steelers 33-39.