Dabang Delhi K.C. secured their fourth win in Vivo Pro Kabaddi League Season VI as they defeated Jaipur Pink Panthers. Jaipur had a poor match as nobody was there to assist a well performing Deepak Hooda who got raid points. Dabang Delhi K.C. on the other hand were seeing all their raiders in fine form as Naveen Kumar got a Super 10 while Meraj Sheykh and Chandran Ranjit got 9 and 8 raid points respectively. Joginder Narwal also played an important role as he got 5 tackle points which included 2 successful Super Tackles on Deepak Hooda when only 2 men were left on the mat. Mohit Chhillar had a forgettable night as he got only 1 tackle point in his 6 attempted tackles.

Jaipur Pink Panthers were coming off a drubbing to U Mumba while Dabang Delhi K.C. will enter the match with positivity they attained with the win over Haryana Steelers. Jaipur Pink Panthers started dominating from the get go as they racked up 3 points in the first 3 minutes without a challenge. Delhi got their scoreboard ticking with a successful bonus point attempt by Naveen Kumar in the 4th minute to make it 3-1. Deepak Hooda’s strong side kick got Ravinder Pahal in the 7th minute which started a landslide for Delhi. 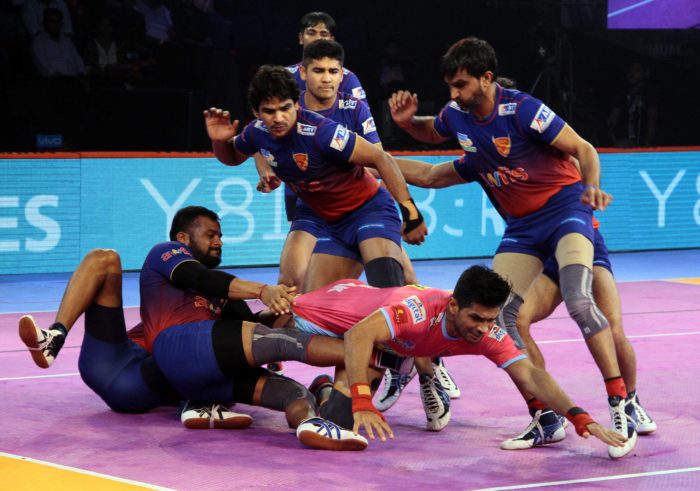 Delhi were being demolished by Jaipur as they were 9-3 down in the 10th minute after they were 4-3 in the 6th minute. This situation was flipped by Captain Joginder Narwal who got a Super Tackle on Deepak Hooda through a double thigh hold in the 10th minute after Delhi were reduced to just two men on the mat to make it 9-5. He repeated this in the 13th minute to close the gap to 3 points as he got another Super Tackle on Hooda with an ankle hold and assist by Ravinder Pahal to make it 10-7. The momentum completely sealed itself towards Delhi after a Super Raid by Meraj Sheykhh which saw him get touch points on Sandeep Dhull, Bajirao Hodage and Anup Kumar before crossing the midline and equalizing the score at 10-10. A rock hard block by Ravinder Pahal sealed the moment for Delhi as they inflicted an All Out on Jaipur to make it 12-15. Meraj Sheykhh got another great raid in the 19th minute which got Sandeep Dhull and Bajirao Hodage to make it 13-19. jaipur came back slightly as the match reached half time with Delhi leading Jaipur by 16-20.

Delhi continued to play well in the second half as they started the half with Chandran Ranjit getting a sneaky toe touch on Anup Kumar in the 21st minute to make it 16-21. Joginder Narwal surprisingly got his first ever High 5 in Vivo Pro Kabaddi League career as he got Selvamani K with a superb short block from behind his back as the raider started to slightly move away from him to make the score 17-24 in the 23rd minute.

Chandran Ranjit got a scorpion kick on a napping Mohit Chhillar who was constantly kept silent by the Delhi raiders as the score shifted to 20-26 in the 27th minute.The 31st minute saw Naveen Kumar using his quick movements to slip out of the grips of Deepak Hooda and Amit Kumar to make Delhi’s lead to 9 points as it became 21-30. Meraj Sheykhh then inflicted another All Out on Jaipur lost Anup Kumar and Anand Patil to a struggling Meraj crossing the midline to put salt to Jaipur’s misery as the score read 23-38. The match ended with Dabang Delhi defeating Jaipur Pink Panthers by 29-40