Dabang Delhi registered a sensational 29-27 victory over Gujarat Fortunegiants in the Vivo Pro Kabaddi Season 6. A last-minute tackle settled what was a really close affair between two evenly-matched teams. Gujarat Fortunegiant’s unbeaten run came to an end with this close defeat. It was a team performance by Dabang Delhi as their star players contributed equally. Meraj Sheykh led the scoring charts with seven points and was ably supported by Ravinder Pahal who scored four crucial tackle points. Sachin scored 9 points for Gujarat Fortunegiants  and Parvesh Bhainswal got 6 tackle points.

It was a close start to the match as both teams matched each other for raid and tackle points. Dong Geon Lee scored two raid points for Gujarat Fortunegiants while Meraj Sheykh got a point for Dabang Delhi. After five minutes both teams were level at 5-5. Dabang Delhi opened up a three-point gap to lead 8-5 after eigth minutes.

A super tackle in the 9th minute by Gujarat cut the lead to 7-8. Guharat Fortunegiants led 10-9 after 13 minutes as they sent Meraj Sheykh packing off to the bench. Another tackle point in the 20th minute meant that Gujarat Fortunegiants went into the break leading 13-11. 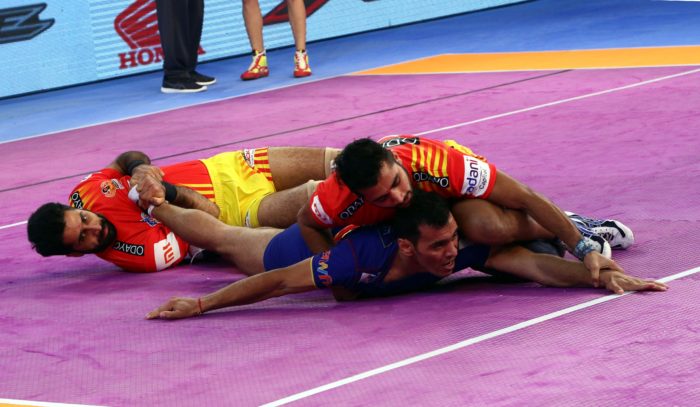 The second half was again a closely fought contest as both teams refused to give an inch. Dabang Delhi inflicted the first all out of the match in 30th minute as Meraj Sheykh made a successful raid. Sachin revived Gujarat Fortunegiants with a couple of successful raids.

The last five minutes of the match were a tense affair as Gujarat Fortunegiants fought back to level the match at 26-26 in the 38th minute. It looked like Gujarat would make another improbable comeback but Dabang Delhi had other plans. A brilliant super tackle in the 40th minute gave Dabang Delhi 29-27 lead as they ended Gujarat’s unbeaten run.