Dabang Delhi began their home leg of Vivo Pro Kabaddi Season 6 in style as they beat Jaipur Pink Panthers 48-35. It was a solid raiding performance from Delhi as Meraj Sheykh (15 points), Naveen Kumar, (9 points) and Chandran Ranjit (9 points) combined to score 33 points. Meraj Sheykh finally found some form for Delhi and played a pivotal part in his team’s victory Jaipur Pink Panthers never recovered from a slow start and just couldn’t handle the intensity of Delhi’s performance. Deepak Hooda produced a terrific raiding performance and scored 20 points but his effort went in vain as he just didn’t get enough support.

Meraj Sheykh got Dabang Delhi to a flying start with super raid in the first minute. Deepak Hooda got a couple of raid points as Jaipur Pink Panthers trailed 3-4 after three minutes. Naveen Kumar made a two-point raid in the 4th minute to give Dabang Delhi 6-4 lead.

Dabang Delhi switched gears as the first half went on as their raiders and defenders outclassed Jaipur Pink Panthers. Meraj Sheykh produced another super raid in the 11th minute as Delhi led 15-7 after inflicting an all out. Three minutes later Dabang Delhi inflicted another all out to lead 25-8. 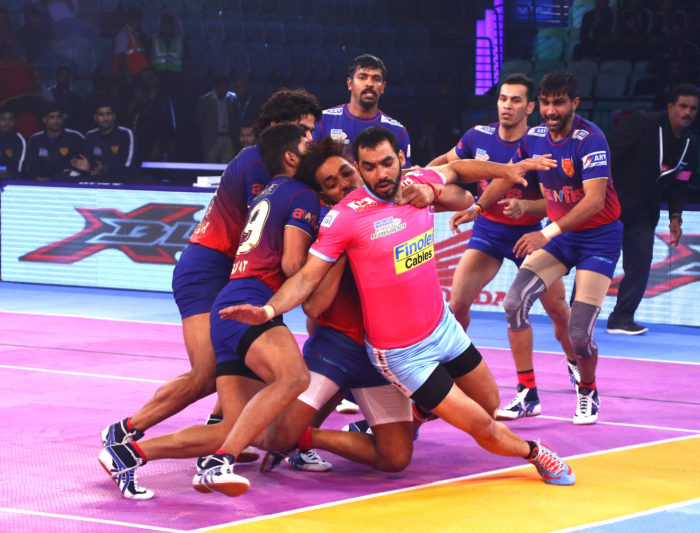 Jaipur Pink Panthers defence had no answer to the raiding prowess of Meraj Sheykh and Chandran Ranjit. They could score just one tackle point in the entire first half. Meraj Sheykh got a super 10 in the first half as Dabang Delhi enjoyed a 19-point gap and led 29-10 at the break.

Dabang Delhi began the second half with a bang as in the 23rd minute they inflicted another all out to lead 33-11. Ravinder Pahal and Joginder Narwal marshaled the Delhi defence brilliantly as they didn’t let any Jaipur raider settle throughout the match. Jaipur Pink Panthers’ captain Anup Kumar had a quiet match by his standards.

Jaipur Pink Panthers salvaged some pride in the second half as in the first 10 minutes they scored 10 points but still trailed 18-36. Ajinkya Pawar scored with a two-point raid as Jaipur Pink Panthers inflicted an all out in the 32nd minute to trail 23-36.

Chandran Ranjit got a two-point raid in the 36th minute to thwart any hope Jaipur had of a comeback even as Deepak Hooda kept picking raid points, including a super raid in the 40th minute.