Ø  The memoir is titled “Dipa Karmakar: The Small Wonder”  India’s first ever female gymnast to compete in the Olympics against all odds

Ø  The book is published by Fingerprint! Publishing

November 3, 2018, Bhubaneswar: Ekamra Sports Literary Festival today witnessed the cover launch of the first ever memoir of Dipa Karmakar – India’s leading female gymnast to compete in the Olympics against all odds. Dipa Karmakar landed the Produnova, considered to be the most difficult vault currently performed in women’s gymnastics. The vault not only ensured that she finished with the fourth position at the event but also helped her become one of only five women who have successfully landed the Produnova writing her name in the history of world gymnastics.

The book titled “Dipa Karmakar: The Small Wonder” is co-authored by veteran journalists Digvijay Singh Deo and Vimal Mohan along with Bishweshwar Nandi – Dipa’s longtime coach. The book is a memoir of Dipa’s illustrious journey from Tripura an often neglected sporting outpost, to the national consciousness and India’s highest sporting honour, the Rajiv Gandhi Khel Ratna Award. Her story is one of grit, determination, and a stubbornness to beat the odds.

Speaking on the occasion Padma Shri Dipa Karmakar said, “A lot has been written about my narrow miss at the Olympics but not many seem to know that Tripura has been a cradle of Indian Gymnastics from the 1960’s. Gymnastics is a very challenging sport and the cover of Small Wonder captures the dedication and focus needed to do well in the sport. I do hope that my story inspires many more children to take up Gymnastics and never take no for an answer.” 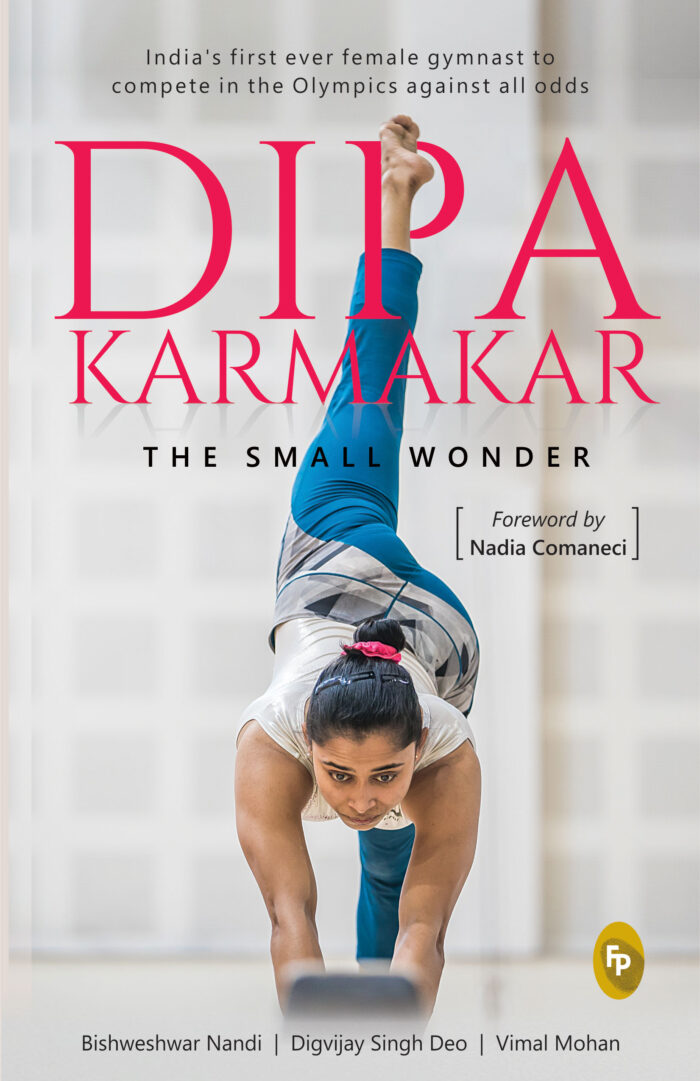 Dipa Karmankar’s coach, mentor and co-author of the biography Bishweshwar Nandi was elated and said “The book will definitely give a new direction to Indian Gymnastics. The book is a true account of Dipa’s journey against the odds. She has put our state of Tripura on the map of Indian sport and also put Indian Gymnastics on the world map which many believed to be impossible. Her story is one which every aspiring gymnast and gymnastics coach should know about and learn from. She has shown that practice and dedication can take you to the top of your sport.”

Commenting on the cover launch veteran journalist and co-author Vimal Mohan said, “Dipa is a fantastic gymnast. She is a superstar, yet she is extremely humble and grounded. Her journey has been tough but is extremely inspiring. To help her write her memoirs has been an extremely privileged assignment. She was an unknown sportsperson from a marginalized state and sport but she raised the bar single-handedly for Indian gymnastics. I believe her best is yet to come.”

Digvijay Singh Deo, also the author of “My Olympic Journey: 50 of India’s Leading Sportspersons on the Biggest Test of Their Career” expressed his views on Dipa and added, “Dipa Karmakar brought gymnastics into the national consciousness with her outstanding effort at the 2016 Rio Olympics. Her inspiring journey from an outpost of Indian sport to that of an elite world class gymnast is one that has to be told. Karmakar has shattered the prevailing narrative that India’s sports persons are held back from achieving their dreams due to an absence of top quality infrastructure at the grassroots level. That argument does not hold anymore.”

The book is going to be available for pre-booking on Amazon on the following link: www.amazon.in/dp/9388369505