Pawan Sehrawat was the fittest player of the match as he made quick and fast raids. The brave moment of the match came in the second minute when Kashiling Adake came up with a super raid.

Bengaluru Bulls earned the bragging rights in the Southern derby as they beat Tamil Thalaivas 44-35 in Vivo Pro Kabaddi Season VI. Pawan Sehrawat with 16 points and Kashiling Adake (12 points) were the star performers for Bengaluru as they registered their second consecutive win of the tournament. This was Tamil Thalaivas’ fifth straight defeat and they haven’t won a match since the opening day of the season. Ajay Thakur was once again tried to salvage the match for Thalaivas but couldn’t get enough support. 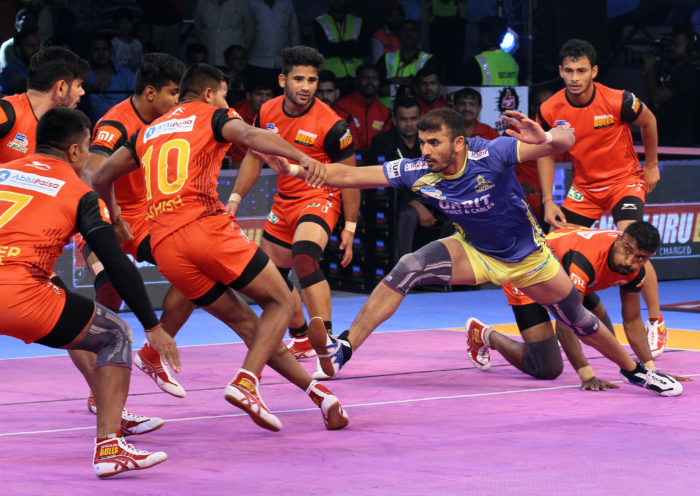 Tamil Thalaivas were clearly struggling a much fitter outfit in Bengaluru Bulls as they didn’t have answer to their raiding prowess. In the sixth minute Pawan Sehrawat came up with a four-point raid to give Bengaluru Bulls 14-3 lead.

Tamil Thalaivas defence had a half to forget as they scored just two tackle points. At the end of the first half Bengaluru Bulls led 25-14 with Kashiling Adake scoring 10 points.

Tamil Thalaivas began the second half strongly as they inflicted an all out in the 24th minute to cut the deficit to 21-29. Tamil Thalaivas tried hard to make a comeback but Bengaluru Bulls’ defence was on top of their game. With their lead cut to just six points, they made to crucial tackles to lead 33-24 in the 30th minute.

Tamil Thalaivas suffered a big blow in the second half when their skipper Ajay Thakur was stretchered off the mat as he suffered an injury. With less than five minutes left, Bengaluru Bulls had opened an 11-point gap and were on course to a comfortable victory.