The brave moment of the match belonged to Rakesh Narwal who made a super raid and averted an all out for Bengal Warriors. Maninder Singh was the fittest player of the match as he made sharp and quick raids at regular intervals.

Bengal Warriors got their campaign of Vivo Pro Kabaddi Season VI with a win as they outclassed Tamil Thalaivas 36-27. It was a complete all-round performance from the Warriors as they inflicted all out at crucial moments. For Tamil Thalaivas, Ajay Thakur wasn’t in good touch and it affected their performance. This was the fourth consecutive defeat for the Thalaivas who now haven’t won a match since the opening day. 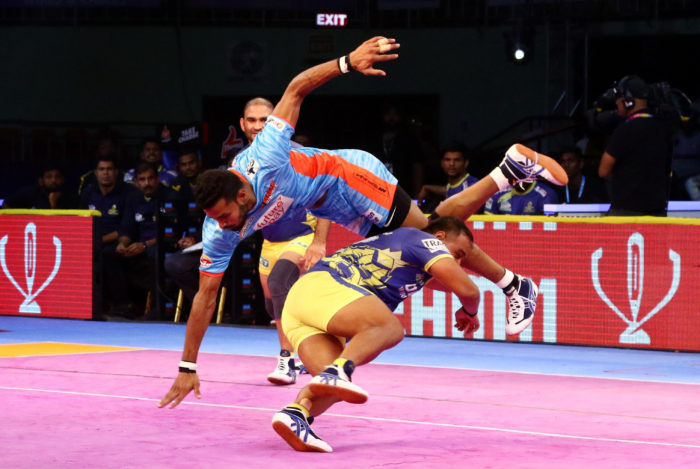 At the end of the first half, Bengal Warriors had inflicted an all out and led 18-15 at the break.

The second half saw Bengal Warriors take full control of the match as they outscored the opposition both in terms of raid points as well as defence. In the 26th minute, they forced another all out to lead 28-19.

This was the first match where Ajay Thakur performed disappointingly by his standards and that hurt the Thalaivas the most. Manjeet Chhillar got a high five and even Jasvir Singh scored six points but Tamil Thalaivas as a unit just didn’t click.
For Bengal Warriors, Maninder Singh put in a fine raiding performance and scored nine points.

With less than 10 minutes to go, Bengal Warriors led 31-22 and looked comfortable. Tamil Thalaivas’ fitness levels were not up to the mark as they looked jaded and tired. Bengal Warriors didn’t make any mistakes and ran out comfortable winners in the end.