All Outs Galore Won By Juggernauts Gujarat Fortunegiants As They Defeat Dabang Delhi K.C. By 38-45

Gujarat Fortunegiants continued their streak with a win over Dabang Delhi K.C. in Vivo Pro Kabaddi League Season VI. Chandran Ranjit and Naveen Kumar tried their best to make an impact on the match by getting 11 and 8 raid points. They were led down by the experienced corner pair Ravinder Pahal and Captain Joginder Narwal who collected 3 tackle points in total between them. Dong Geon Lee was brought in for the match and caused problems for Delhi to get a Super 10. Sunil Kumar had a below par performance but his absence was covered up by Parvesh Bhainswal who got 6 tackle points. 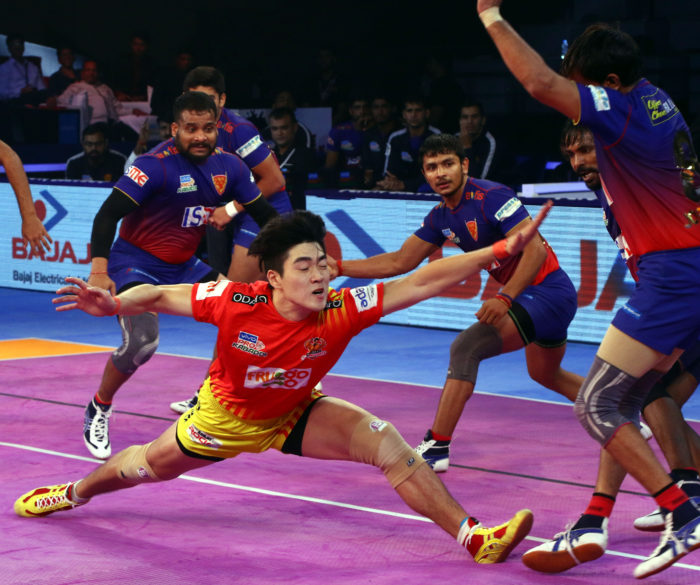 Dabang Delhi K.C. and Gujarat Fortunegiants will try to register a win over the other as the last time they had a very well fought tie. Gujarat Fortunegiants started the match with a toe touch by Rohit Gulia on Vishal in the first raid of the match. They continued to dominate Delhi with Rohit Gulia getting a Super Raid with a bonus point and touch points on Vishal and Yogesh Hooda to make it 1-5 in favour of Gujarat by the 3rd minute. They then inflicted an All Out on Delhi by the 6th minute to take an 8 point lead with 3-11.

It looked like Delhi were moving towards another loss, they got a boost of optimism with Naveen Kumar and Chandran Ranjit who got regular touch points on Gujarat. They got Sunil Kumar and Parvesh Bhainswal ushered to the mat by the 11th minute which made Gujarat helpless. This could be seen clearly as they were All Out in the 15th minute with Ravinder Pahal getting a thigh hold on K. Prapanjan and make it 15-18.  Delhi couldn’t keep up with this great form as they again conceded an All Out by the 19th minute to make it 17-27 with Yogesh Hooda being caught by Sunil Kumar with a strong thigh hold. The half ended with Gujarat leading with a 9 point lead with 18-27.

Dabang Delhi came with a positive attitude to get the Gujarat defense weakened by getting Parvesh and Sunil out by the 23rd minute to make it 20-29. Gujarat got a Super Tackle as Naveen entered the lobby without a touch while Sachin got out of the mat. Rohit Gulia was also giving soft points to Delhi as he tried to tackle the raiders regularly.

Parvesh Bhainswal got a Super Tackle with a strong thigh hold on Chandran Ranjit to extend the lead to 24-36 by the 27th minute. Delhi tried to make a comeback by inflicting an All Out on Gujarat when Chandran Ranjit got Parvesh Bhainswal and Sachin out in the 30th minute to reduce the lead to 7 points. Dong Geon Lee was causing trouble for Delhi with his agility and quick movements by regularly getting Ravinder Pahal to make mistakes. The 36th minute saw Ruturaj Koravi dash onto Chandran Ranjit to cause an injury to both of them. Delhi thought on reducing the lead but after the 37th minute saw Yogesh Hooda concede a Super Tackle by Sachin Vittala this could not be done. Gujarat made sure that they win the match by slowing down the match with empty raids and hence won it by 38-45.