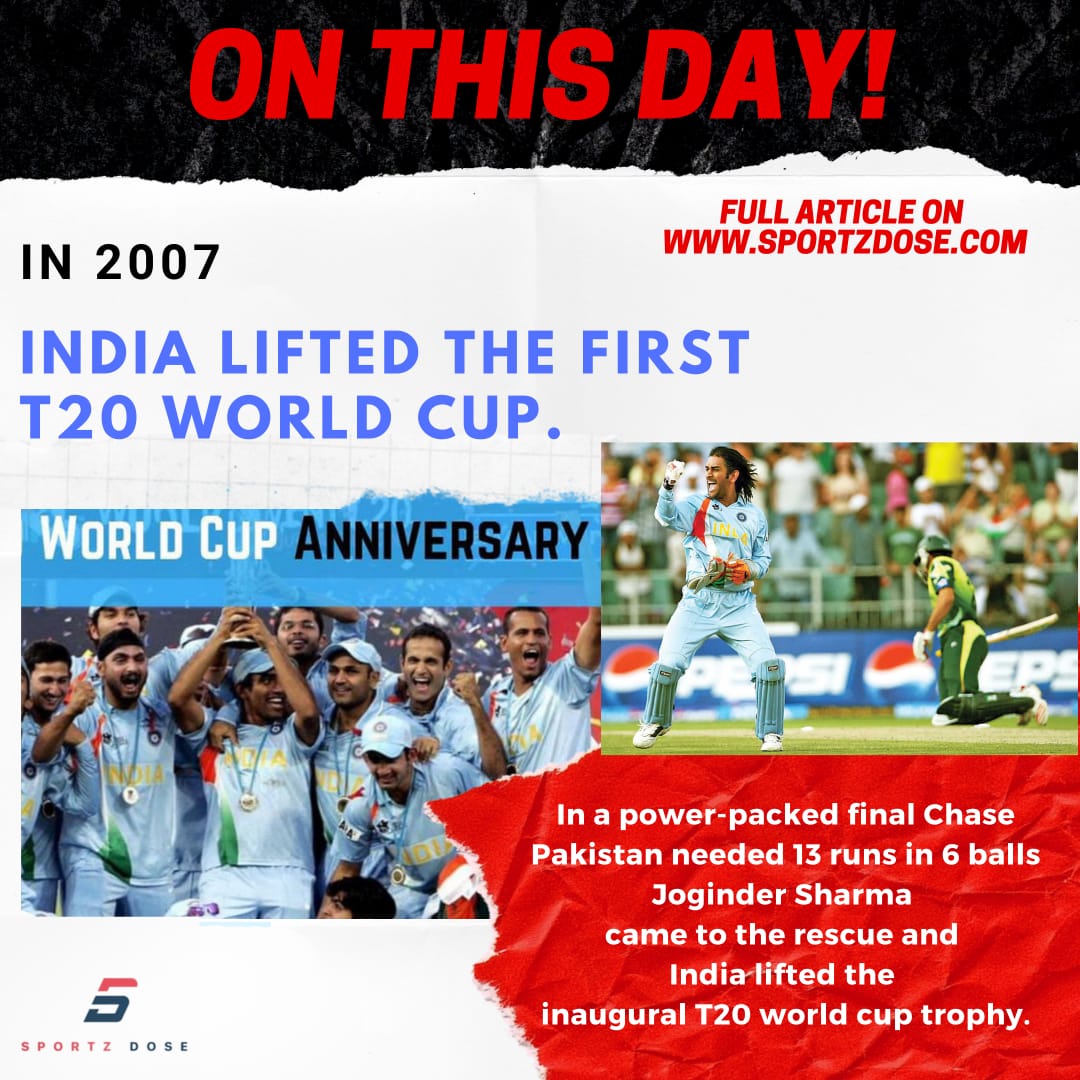 24 September 2007: This day, a leader, a mentor, and a captain was born who led a young bunch of lads on the stage where every player rose his head in pride along with a millions of new generation of Indian cricket fans back home & around the globe to be able to proudly call themselves “World Champions.”

This day not only created history in Indian cricket but invoked a belief that the best, experienced teams in the World cricket can be defeated if you have the capability to analyse every possible situation, thereby preparing according to the format.

India – being the only team to have practised a bowl-out on their roadmap to glory gave them a comfortable edge over their arch-rivals in their 1st match of the tournament (after the abandoned match against Scotland) when the situation demanded so.

The six 6’s by the maestro Yuvraj Singh against England at Durban which booked the SF spot for the Men in Blue against the hot favourites – Australia. The Indian trio – Sreesanth, Irfan Pathan, Joginder Sharma against experienced Aussie bowling comprising of Lee, Bracken, Johnson indicated that the spot in the finals had to be earned.

The final saw Indian opener Gautam Gambhir step up against the pace battery of Pakistan – Umar Gul, Mohammad Asif and Sohail Tanvir as he garnered a score of 75 in 54 balls. The Indian middle-order suffered as Umar Gul tore through the lineup. Rohit Sharma’s quickfire 30 in the end helped India post a respectable 157/5 on the board.

Pakistan also began poorly in their run chase as Mohammed Hafeez lost his wicket in the first over to RP Singh. Their batting continued to stutter as they were stranded at 77-6 around the 12th over. Apart from the contributions of Imran Nazir (33) and Younis Khan (24), none of the other batsmen managed any significant scores. Misbah-ul-Haq took charge of the chase along with the lower middle order and kept motoring towards the target.

The captain who believed in his young pacer – Joginder Sharma to handle the last over rather than experienced Harbhajan Singh against a set batsman Misbah-Ul-Haq. Sharma successfully defended 6 runs in last 4 deliveries of the game and made us believe that more than written norms & trend – success favours the one who is aware of the current situation throughout the game.

A World Cup can be won through wit & knowledge of reading the situation throughout the tournament, thereby overcoming the hardest challenges awaiting for you on the path.

“It’s up in the air, Sreesanth…. “ – the words by Ravi Shastri & the scenario thereafter will continue to give goosebumps to the Indian cricket fraternity forever.

Thank you, captain, Thank you Maahi for teaching us this important life-lesson which came in the form of T20 World Cup, 2007 in the life of every Indian & individual.