by Sachim Karekar
in India
0

14
SHARES
41
VIEWS
Share on FacebookShare on Twitter
YANGON (MYANMAR), 10th November 2018: The Indian women’s national team takes on Bangladesh in their second match of the first round of the 2020 AFC Women’s Olympic Qualifying Tournament, which will be held at the Thuwunna Stadium in Yangon on Sunday (November 11).
After playing out a 1-1 draw against Nepal in their opening match in Group C, team India will be eyeing all three points against Bangladesh, which will be extremely crucial to their chances of qualifying for the second round.
The Indians currently have one point, along with Nepal, while Bangladesh are yet to open their account, with them having lost their first match against hosts Myanmar by a 5-0 margin. 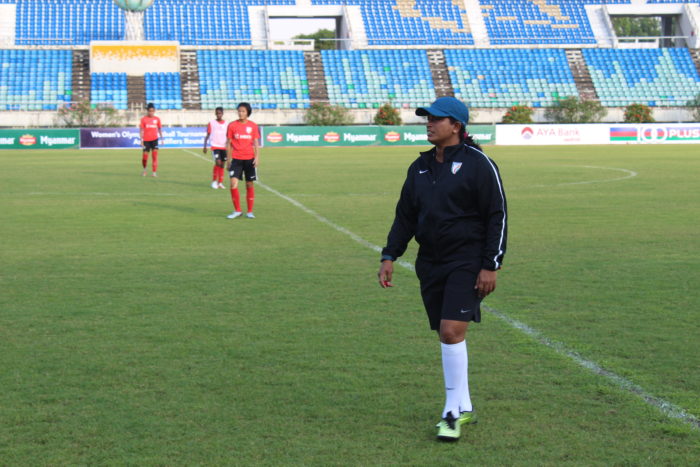 Ahead of the important clash, Indian coach Maymol Rocky spoke about how her side is confident about the getting the job done versus Bangladesh. She stated, “We are expecting a tough match against Bangladesh. They are a good side and the match will not be one-sided at all. We will have to work hard but I’m sure the girls will give their best and we will see a positive result.”
She also talked about her plans to make a few changes to the starting lineup from the previous game. “The match against Nepal was a good one. It was certainly tough but the players gave it their all but could not finish the chances they created. However, I feel a few changes to the playing XI are still needed and we will see them once the team is announced before the match,” added Rocky.
Share14TweetShare