We’ve Come With A Strong Intent To Win The Tournament: Constantine

NEW DELHI, SEPTEMBER 13th : With India having secured a summit clash with Maldives in the final of the SAFF Suzuki Cup to be held at the Bangabandhu Stadium in Dhaka on Saturday (September 15), Head Constantine reflected the “final will be a tough one.” 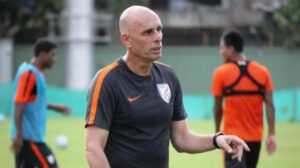 “Maldives have shown their worth in the semi-final against Nepal. A 3-0 win against Nepal was not an easy task. Some of their players didn’t play against us and they did some major damage work against Nepal,” Constantine stated. “We are expecting a tough game against Maldives. But as I said before, we have come with a strong intent to win the tournament.”

Manvir Singh who scored a brace against Pakistan in the semi-final to win his successive MVP Award of the tournament said the focus has “already shifted to the final.”

“It was a group of tough guys and the job was never going to be an easy one. But we had the self-belief to churn out the positive result and eventually, we did,” he smiled.

“Now, we have another major task in three days and we will need to focus on the final. We are working as a unit and we just need to keep our heads down and continue the work,” the 23-year-old striker who is leading the goal-scorers’ chart with 3 goals, maintained.

Constantine added: “These boys have a carrot in front of them which is a berth in the Asian Cup squad. They are well aware of the fact that they need to perform constantly to earn the same.”

The Coach also lavished praise for the All India Football Federation for allowing him to work his own way.

“I would like to thank All India Football Federation for giving me the freedom to work my own way. Regarding the team’s requirement, I have hardly been denied whatever I asked for. The credit of rising to 96 from 173 in the FIFA Rankings in less than 4 years caters to everyone including the excellent backroom staffs who I work with.”

“Our Sports Scientist Danny Deigan implemented some of the major tools and it helps us in one way or other. We have a huge chunk of data with us and they are invaluable in terms of drawing a blueprint,” he informed.

“Gigy George is one of the best physios who I have worked with till date. The medical team works until 1am in the morning to keep the boys fit and running. Mostly, the credit goes to the players who have believed in themselves. Trust me, I’m not an easy guy to live with (laughs),” the Coach quipped.

The SAFF Suzuki Cup 2018 final will kick-off at IST 6.30pm and will be telecast live on D Sport.