We’re Not Just A Team But A Family, U-16 Girls Say In Unison

ULAANBAATAR, 25th September 2018 : They say, a team only can prevail over the odds when they are not just a team, but a family. Taking a sneak peek into the Indian U-16 Women’s National Team and you find it’s a family who laugh together, cry together and take an oath together to excel in the future. 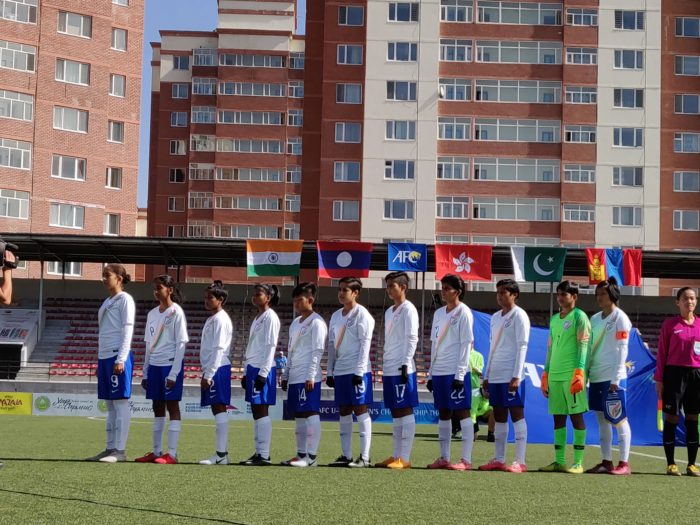 “It’s not more than 2-3 months since we first met and it has become my family now. I used to miss my parents earlier but you gave me so much warmth, I don’t miss them anymore while I’m around you. After going back, I’m going to miss you terribly,” Midfielder Aveka Singh’s eyes turned moist during the team-bonding session.

After narrowly missing out the berth in the second round of the qualifiers of AFC U-16 Women’s Championship Thailand 2019 following the 1-1 draw with Laos, coach Firmin D’Souza had gathered the entire team for a team-bonding exercise before they bid each other adieu which ended up being no less than a heavy emotional affair for everyone.

Qadeer Mohamed Shaikh, the goalkeeping coach said: “Everyone says the players learn from the coaches. But I don’t feel shy about saying we who get to learn so many things of life from you. I feel so lucky sharing the camp with you. There’s a long way to go and you’ll shine in the future. My best wishes are always with you,” he said.

The shy Lynda Kom, the tiny winger who scored Indian’s only hat-trick in the AFC Championship qualifiers campaign couldn’t hold back her emotions in front of her teammates.

“I am not very much comfortable in English or Hindi but my teammates, coaches and other support staff didn’t let me feel left out for a single moment. Earlier, I used to have a shadow of a doubt at the back of my mind of expressing during the team meetings but gradually, it evaporated,” Lynda quipped.

For a host of players including skipper Shilky Devi who hail from the state of Manipur, the legendary Bembem Devi, the Asst. Coach of the team has always been the go-to person.

“I was skipper of the team for a long time during my playing days. Thanks to AIFF, I got the coaching opportunity and I can’t explain how fortunate I am. Going back, my life is not going to be the same. I have got pictures with all of you and I’ll frame them once I get back to my ,” Bembem Devi’s words were softer but they carried stronger emotions.

Meanwhile, the coaching staff shared their anecdotes from playing career with the players which carried nothing but the underlying truth — “be ready to accept the defeat as you stay up to embrace the win.”

Firmin D’Souza, the eloquent coach who always encourages the players to speak their heart out, shared an invaluable bit of suggestion with the girls.

“There is no sportsperson who hasn’t tasted defeat in his/her career. One can only attain the next level when one accepts the defeat as wholeheartedly as one embraces the victory,” he pronounced.

“You have braved all the odds and you have given your lives on the pitch- that’s what satisfies me as the coach. I can’t say how much I’m going to miss the camp in the next few days,” his voice choked.