We Have Got Better As The Tournament Has Progressed: Bibiano

KUALA LUMPUR (MALAYSIA), 25th September 2018 : Not a man who prefers to dive deep into history, Indian U-16 National Team Head Coach Bibiano Fernandes smiled when reminded that it was back in 1984 when India had last held Iran to a goalless draw in the Asia Cup Finals in Singapore. 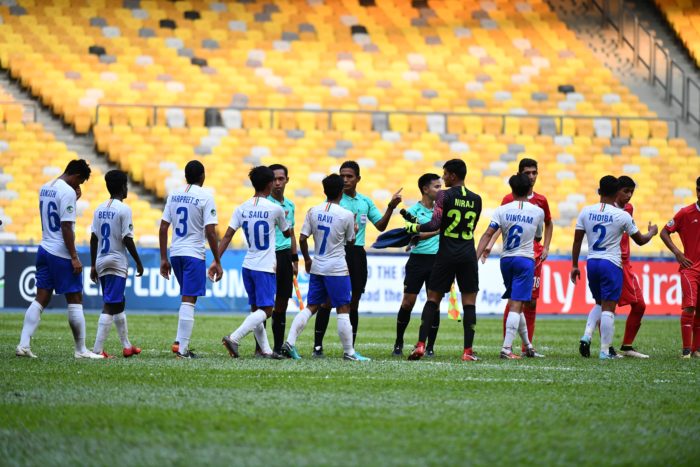 The morning after his wards held “mighty” Iran to a goalless draw in the ongoing AFC U-16 Championship Malaysia 2018 in Kuala Lumpur, Bibiano preferred to reflect back on his team’s performance.

“We have got better and better as the tournament has progressed. The mistakes I had identified defensively in the game against Vietnam were not there against Iran,” he stated.

As things stand now, India need a draw against current table toppers Indonesia to advance to the quarterfinals. Even a loss will earn them a quarter-final ticket if the other match between Iran and Vietnam which kicks-off at the same time ends in a draw.

“We performed to the best of our abilities and though it would have been special if we would have won, we are happy with a point and aim on our next opponents,” Bibiano reflected on India’s 3 missed chances in the last 5 minutes.

“We had aimed for a win, but I am very pleased and happy with a point and a draw. As long as chances are created, goals would come. It would have been a worry if chances were not created,” the Coach added.

Meanwhile Goalkeeper Niraj Kumar who saved a penalty in the 76th minute maintained it was “big challenge” to play Iran.

“I was confident that I would save the penalty,” he laughed. “We were playing at a rhythm in the match and I had that confidence and the team support behind me,” he quipped. “It is always a challenge to face Iran and we had to be on our toes defensively to put up with their swift forwards.”

Defender Bikash Yumnam maintained “it won’t be easy against Indonesia.”

“We were very compact defensively against Iran. We know we had to play together as a unit. Iran are very strong in attack but we devised a plan to counter that,” he informed.

“It won’t be easy against Indonesia. They have very swift forwards. We will stick to our strategy against them. We will give our best.”

The calm man that he is, Bibiano has been successful in developing a bunch of raw talented youngsters into a cohesive unit.

“The positive part is that we are still developing into a more evolved version as a team. Each and every player is giving his cent percent in training and are playing as a single unit. We have the capacity to give our cent percent in each and this team has shown what dedication and hard work can do in football,” Bibiano pronounced.

“It was a difficult match for us against Iran. Iran are one of the strongest teams to face in youth tournaments and we almost had a win against them,” he shook his head.