Want To Score Goals In Every Match, Exclaims India U-16 Midfielder Ravi Rana

NEW DELHI, 18th September 2018 : Football in India is on the upward surge and with regions everywhere being engaged in the grassroots project, the state of Jammu and Kashmir has presented the Indian U-16 National Team with a prolific midfielder – Ravi Rana. 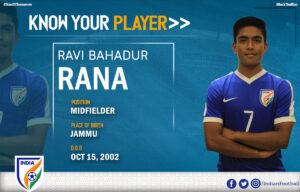 The teenager, who scored a hattrick on his first international cap, isn’t willing to read much into the hype surrounding him but stays focused on the task ahead, the AFC U-16 Championships. “We are here to win. We want to win. We want to create history,” he says.

Like he plays football – tearing defences with few precise passes – in a few words, Ravi explains a lot. Ever since football happened to Ravi when he was 4 years old, the midfielder hasn’t looked back. “My mother motivated me to play football and there were times when she used to take me to practice. Those days feel like a different life now.”

Ravi starred in the 2-2 draw against Bangkok Glass FC and scored the equalizing goal in Thailand from long range. Now one of the integral members of the team, the midfielder is excited to play in the AFC U-16 Championship like never before.

“It has been my dream to play in the FIFA U17 World Cup and we can play by creating history and becoming the first Indian team to qualify.”

Ravi wastes little time beating the bush and declares, “I want to score goals in every match. The joy of scoring a goal in the biggest platform in Asia will be immense.”

“But more will be the joy when we win the matches and qualify for the FIFA U-17 World Cup. It is not impossible”, after a while he adds, “It can be done. We just need to work hard.”

The Indian U-16 National Team faces Vietnam in the opening match of the AFC U-16 Championship on September 21, 2018.