Bengaluru, November 30: Bengaluru FC saw their winning run in the Hero Indian Super League extend to six games after a pulsating clash against FC Pune City that finished 2-1 at the Sree Kanteerava stadium on Friday.
Udanta Singh gave the hosts the early lead in the 11th minute but his sumptuous strike was cancelled out by a Rahul Bheke (15’) own goal. The Bengaluru right-back, however, slammed in a late winner (89’) to redeem himself and render a heroic defensive effort from Pune City void. 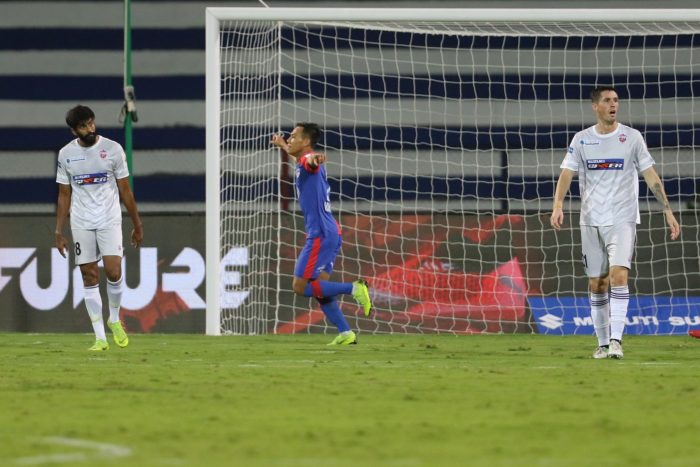 The win sends Bengaluru five points clear at the top of the table, while Pune remain ninth.
It were the hosts who took the early lead against the run of play in the 10th minute. Winger Udanta Singh sold Chhuantea Fanai a dummy with a step-over before cutting on to his left foot and unleashing an unstoppable shot past Kamaljit Singh.

That goal spurred Bengaluru to life with Sunil Chhetri and Chencho Gyeltshen coming close before Pune sneaked in an equaliser through a Rahul Bheke own goal. The Bengaluru defender could only turn the ball into his own net as he attempted to stop Marko Stankovic’s cross from the right flank from reaching an unmarked Robin Singh.

A quick Bengaluru breakaway initiated by Erik Paartalu almost saw Chhetri put the hosts back in front but he was denied by a combination of Kamaljit and Matt Mills as Pune breathed a sigh of relief.
The Blues assumed ascendancy in the game as the half progressed but Chencho and Chhetri were unable to break the deadlock, while Paartalu rattled the crossbar with a venomous strike as the first period drew to a close with the two teams level.

Bengaluru continued to search for the winner in the second period with Pune threatening too at the other end with efforts from Mills and Kuruniyan.
Cuadrat introduced Thongkhosiem Haokip for Chencho Gyeltshen in the last quarter as he looked to shake things up in attack. The Bengaluru coach was then left scratching his head in frustration as Udanta got the better of Sahil Panwar before striking the near post with a fierce shot.

The hosts poured forward in search of a goal but were left increasingly frustrated as Pune’s defence stood tall in the second period with Chhetri and Co continuing to be denied. Kamaljit pulled off a couple of good saves, including a vital one off Haokip’s close-range effort.
In the end, Bengaluru’s blushes were saved by Bheke in the dying minutes. Harmanjot Khabra did well to keep a long ball in play from the right flank. Khabra’s hopeful volley back towards the goal saw Bheke ghost in unmarked and slam the ball into an empty net to spark joyous scenes in Bengaluru.
Tags: BengaluruBengaluru FCBFCFC Pune CityfcpcHero ISLIndian Footballindian super leagueISLPune
0Likes
Leave a comment