A solid defensive performance by UP Yoddha saw them beat Telugu Titans 27-X20 in Vivo Pro Kabaddi Season 6. Led by Nitesh Kumar who scored 5 points, the Yoddha defence scored 11 tackle points. Prashanth Kumar Rai was the top scorer for UP Yoddha with 8 raid points. Abozar Mighani was a rock at the back for Telugu Titans and scored six tackle points but was let down by his raiders. Nilesh Salunke scored just one raid point while Rahul Chaudhari got 6 points for Telugu Titans. Both teams remain in contention for a place in the playoffs.

UP Yoddha made a strong start to lead 3-0 after three minutes as Prashanth Kumar Rai made a two-point raid. It was a close contest in the first five minutes as Telugu Titans trailed 2-3. Telugu Titans led for the first time as they took 5-4 lead after eight minutes. Both teams traded raid and tackle points in the next few minutes with the score 8-8 after 15 minutes. 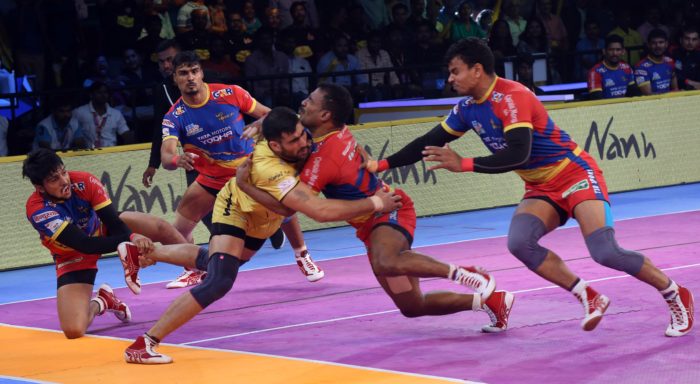 Abozar Mighani and Nitesh Kumar marshaled their teams’ defence superbly in a low-scoring half. Rahul Chaudhari made a two-point raid in the 18th minute as Titans went into the break leading 11-10.

UP Yoddha were the better in the second half as Nitesh Kumar kept Rahul Chaudhari quiet and got a high five himself. Titans forced a super tackle in the 28th minute to trail 15-16.

The next few minutes of the match saw UP Yoddha open a sizeable lead. An all out was inflicted in the 31st minute to lead 21-16.

With less than five minutes to go UP Yoddha held a six-point lead. The match looked like slipping from Titans’ grasp when Prashanth Rai made a two-point raid in the 39th minute as UP Yoddha led 27-19.