by Sachim Karekar
in Pro Kabaddi, Tamil Thalaivas, UP Yoddhas
0

Tamil Thalaivas stopped their losing streak with a victory over the host UP Yoddha in Vivo Pro Kabaddi League Season VI. Manjeet Chhillar and Amit Hooda caused great difficulties for UP Yoddha as they got 8 and 6 tackle points on UP Yoddha’s raiders. Sukesh Hegde did the damage in the first half especially with his amazing 15th minute raid to inflict an All Out. Ajay Thakur took the mantle from Sukesh in the second half to increase the damage. Prashant Kumar Rai was the only raider who caused some difficulties for Tamil Thalaivas. 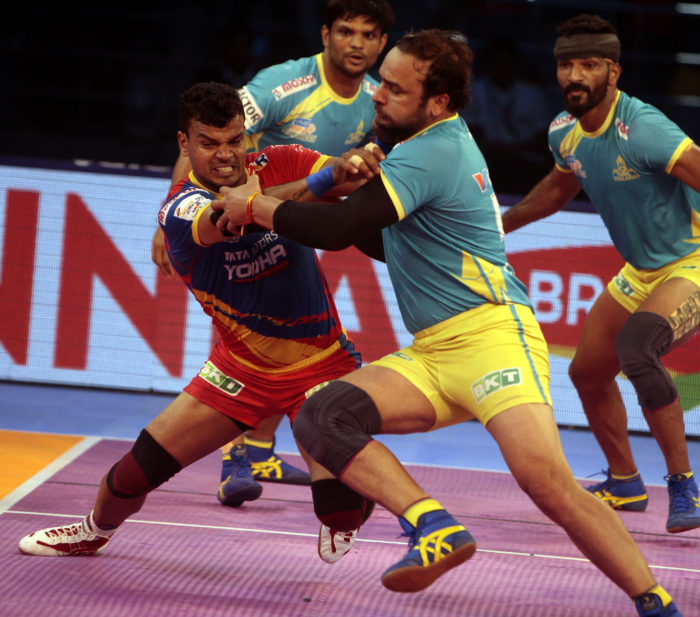 The focus was now shifted from Patliputra Indoor Stadium, Patna to Shaheed Vijay Singh Pathik Sports Complex, Greater Noida which is the home stadium of UP Yoddha. UP Yoddha were entering this match with an unbeaten streak of 3 matches while Tamil Thalaivas were coming from a loss against Gujarat Fortunegiants. It looked like the home leg started acting as a pressure to UP Yoddha as they were 3 points down by the 3rd minute as the score was 1-4 in favour of Tamil Thalaivas. They did get a Super Tackle on Jasvir Singh in the 3rd minute when Narender got a strong ankle hold on him which reduced the gap to 3-4. 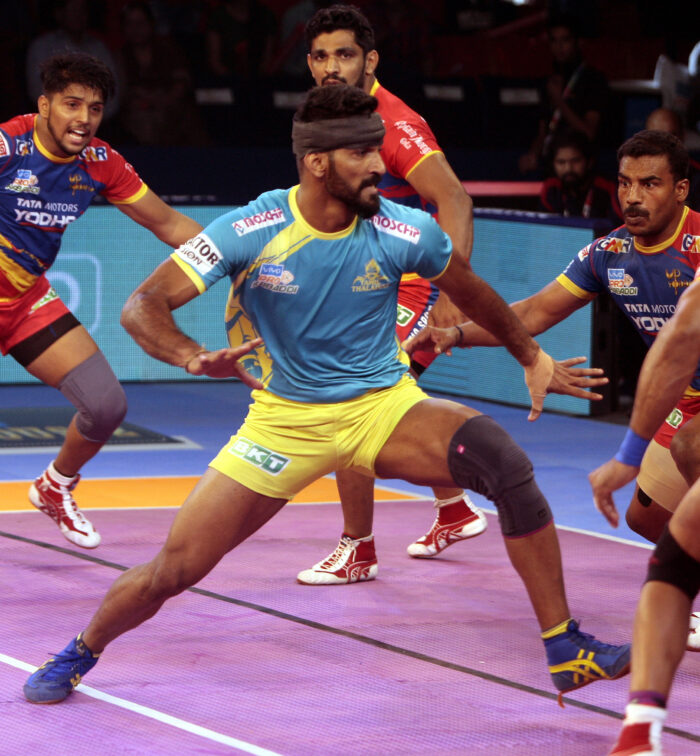 UP continued to have a dismal show as they were All Out in the 6th minute to make it 4-10 in favour of Tamil Thalaivas. This match saw Sukesh Hegde reach the 300 raid points mark in the 9th minute as he successfully attempted for a bonus point and take it to a 6 point lead with 7-13. The game slowed down slightly only to make jaws ajar in the 15th minute when Sukesh Hegde got Rishank Devadiga, Narender and Jeeva Kumar out in his fluid movements and inflict another All Out on UP Yoddha to make it a 14 point lead. The half ended with Tamil Thalaivas dominating UP Yoddha by 11-26. 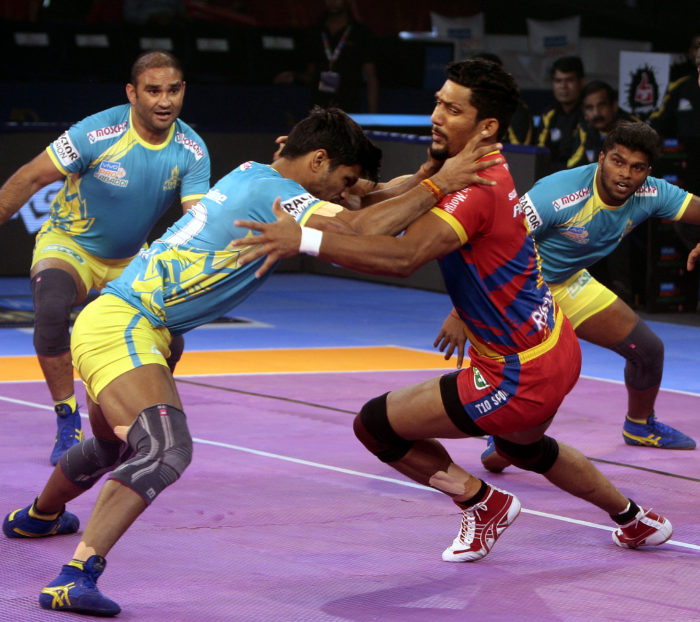 UP Yoddha would have needed a miraculous effort to come back from such a miserable first half. They did try to do some damage but were matched every time by Tamil Thalaivas. Tamil Thalaivas continued to increase the lead to 14-28 in the 26th minute as Amit Hooda stopped Prashant Kumar Rai from running away with a strong double ankle hold.

Sukesh Hegde started to have a contrasting second half as he didn’t get any raid points for the half. Amit Hooda was the most disciplined player for Tamil Thalaivas as he got ushered to the bench for the first time in the match in the 37th minute by substitute Md. Masud Karim to make it 21-35. Ajay Thakur was getting Narender out from a touch point but got Jeeva Kumar as well while Jeeva was trying to get out of his way in the 38th minute Do-Or- Die raid by Ajay. Tamil Thalaivas inflicted another All Out on UP Yoddha in the 39th minute when Amit Hooda got an ankle hold on Prashant Kumar Rai to make it 23-43. The match ended with Tamil Thalaivas winning it 24-46 against UP Yoddha. 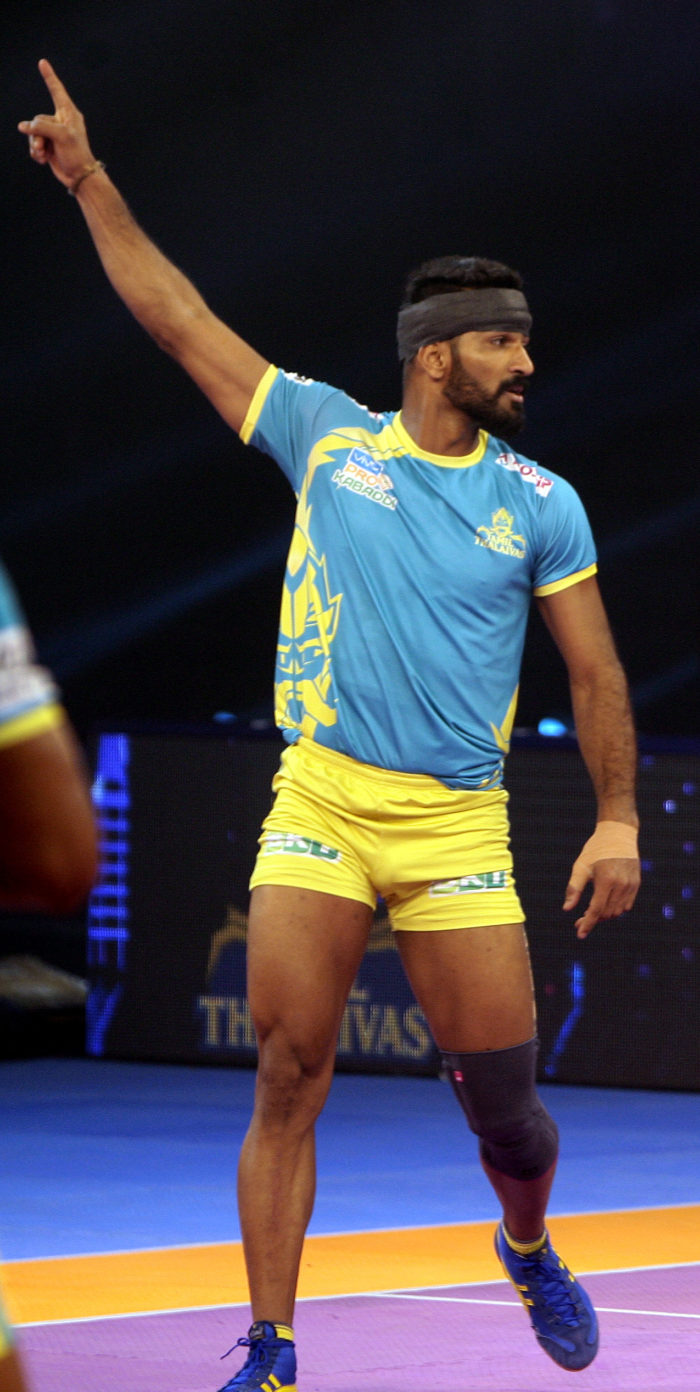