Rishank Devadiga To Lead ‘UP Yoddha’ In The 6th Vivo PKL

27th September 2018; Greater Noida: UP Yoddha – The GMR Group owned franchise of the Vivo-Pro Kabaddi League (Vivo-PKL) based out of India’s largest state Uttar Pradesh (UP) today announced their star raider Rishank Devadiga as the Captain for the upcoming sixth edition of the Vivo-PKL. The franchisee also announced that the state-of-the-art Shaheed Vijay Singh Pathik Sports Complex, Greater Noida would serve as their home ground for this season from 2-8 November 2018. The event also saw the launch of their new attractive players Kits along-with their new TV campaign with the slogan ‘Saans Rok, Seena Thok.’ 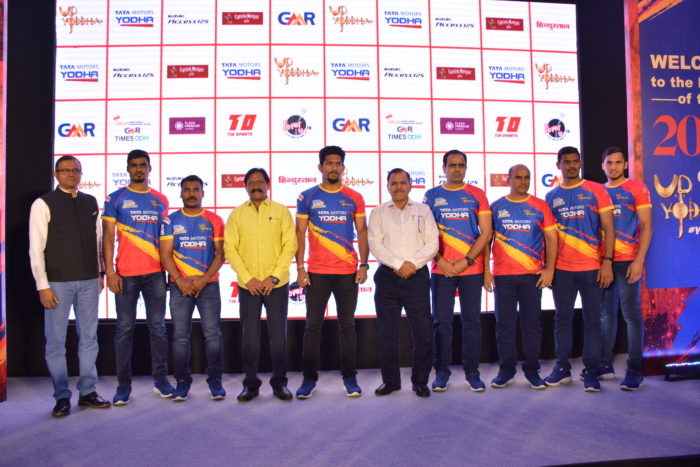 “Kabaddi is a sport that everyone of us have played at least once in our lifetime and the Pro Kabaddi League has undoubtedly ensured that Kabaddi is now no more a backyard past-time but a full fledged professional sport. Given Uttar Pradesh’s rich history in the sport of Kabaddi it was befitting for UP to have a team in the league and I am glad that the GMR Group recognized this opportunity. I am sure the UP Yoddha would make us proud this season and I hope to see them come back home at the top,” said Shri Chetan Chauhan, Minister for Youth & Sports, Uttar Pradesh.

UP Yoddha who are fondly called ‘The Yoddha’ by their fans had an impressive first season in 2017. The team finished 3rd in there Zone and fifth overall. UP Yoddha are confident of improving their performance this season given the depth of experience that the team showcases now.

Speaking at the launch ceremony, Col. Vinod Bisht, VP, GMR League Games said, “Our first season was a good experience for us and the team and management learnt its lessons well. This year we have been very careful in choosing our players and we are confident of improving on last season. I am glad that the coach and the team has chosen Rishank as their captain and his recent stint as Maharashtra captain has only shown us his capability and how he was the apt choice for the position. I am also thankful to our sponsors for their support and the Greater Noida Industrial Development Authority group for helping us with their state-of-the-art Shaheed Vijay Singh Pathik Sports Complex as our home ground. I hope we will give enough reasons to our fans to rejoice our second season in the Vivo-Pro Kabaddi League.”

Also sharing his excitement was Mr. R T Wasan, Vice President – Sales & Marketing, Tata Motors, ” We are glad to continue the association of our dynamic pickup truck Tata Yodha with the UP Yoddha Vivo-PKL franchisee. The UP Yoddha squad aptly reflects the attributes of dynamism, endurance and strength, cornerstones of the Tata Yodha pickup truck. We had an exciting fifth Vivo-PKL season and are confident that the sixth season will be even more successful. Here’s to more glory and success to the UP Yoddha team for the sixth season of the Vivo-PKL.’’

Mr. Satoshi Uchida, Managing Director, Suzuki Motorcycle India said, “We are very excited to associate with the UP Yoddha franchisee of the country’s most popular sports league, the PKL. The Suzuki Access 125 is all about performance and efficiency and that is what we expect to see more of from the UP Yoddha this sixth PKL season. We wish “UP Yoddha” all the very best and may they go beyond and higher.”

“We are thrilled to be a part of the Pro Kabbadi League through this association with UP Yoddha and Captain Morgan Cola. The UP Yoddha team is a powerhouse with young and energetic players. This association with one of India’s leading Kabbadi team allows us to engage with fans of this growing sport by evoking the fun quotient with Captain Morgan Cola. We look forward to a fruitful season for the team and hope they bring the cup home this year,” said Amarpreet Singh, Executive Vice President & Portfolio Head, Marketing, Diageo India.

UP Yoddha begin their season in Chennai against Tamil Thalaivas on the 8th of October 2018. The team will play a total of 22 games, which also includes six games at their home venue in Greater Noida from November 2-8, 2018.