Bengaluru, 29 November 2018: When FC Pune City walk out on to the Sree Kanteerava stadium in Bengaluru to lock horns with Bengaluru FC, it will be a homecoming of sorts for the Stallions’ interim head coach Pradyum Reddy.

Having been an integral part of the coaching staff when Bengaluru FC was established back in 2013, Reddy was instrumental in putting together a competitive Indian contingent. The team would go on to enjoy success in the three years he spent there before joining Pune City as an assistant coach back in 2017.

Despite the familiarity and popularity he enjoys in Bengaluru, Reddy will have his task cut out on Friday as he aims to stop Carles Cuadrat’s team who are still unbeaten in the ongoing season of the Hero Indian Super League (ISL).

With just one win in their kitty from nine games, Pune City have no option but to arrest their slide by taking down the table-toppers. They seemed to have turned a corner after their 2-1 win over Jamshedpur FC but a defeat against NorthEast United deflated the optimism about them.

Against Bengaluru, Pune need to sort out their defence which has the worst record so far (19 goals conceded). The Pune defence has faced the most shots so far (141) in the league which indicates how porous they have been at the back.

“The defence has been an issue over the course of the season but you look at the last match, defensively throughout the 90 minutes, we were pretty well organized. We conceded from a set-piece which has been an Achilles heel this season,” Reddy said.

“The bigger concern is when we have played too defensively, we haven’t managed to have an attacking threat. When we have gone out to attack, we have left holes at the back. I think we have to find the right balance.”

To keep out Sunil Chhetri and company will be a tough ask but they will be relieved that the injured Miku is unavailable until January, having flown out to Spain for treatment. But Chhetri loves playing Pune City and has scored six in as many fixtures against them in earlier seasons.

“Miku is the kind of player you cannot replace, because you have to change the way you play. But it’s interesting for us to try things that we have been working on until now,” revealed Cuadrat.

In contrast, Bengaluru have the tightest defence in the league and have conceded just five goals. Albert Serran and Juanan have been solid at the back and in case they are beaten, a brilliant Gurpreet Singh Sandhu is a reliable last line of defence, as he showed in their 1-0 win over Delhi Dynamos. Gurpreet is leading the Golden Glove leaderboard and has 3 cleansheets to his name already. 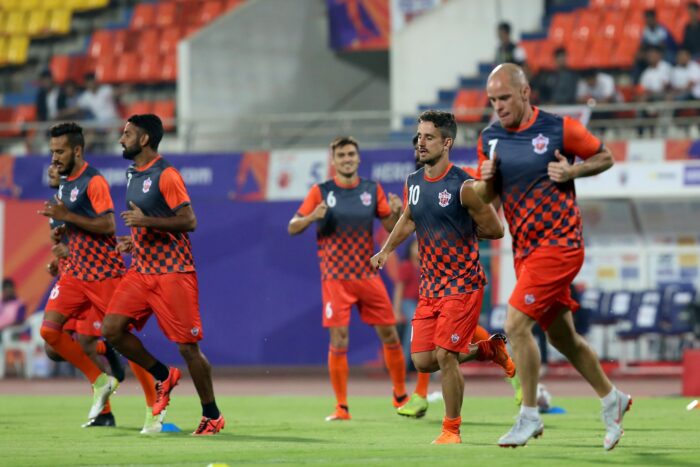 “They (Pune) are in that moment where they want to get points and they are going to come here like Delhi, to get three points. It will be a new test for us. I hope we can make a good game to get three points again,” Cuadrat assessed.

Pune City’s big names in attack – Marcelinho and Diego Carlos – have not really sparkled this season. Iain Hume has only made two appearances so far and Reddy will hope his industry and workrate up front provides dividends against the meanest defence in the league.

Bengaluru have been boosted by the return of Dimas Delgado who was suspended for their previous game against Delhi. The Spaniard is very influential in midfield and Cuadrat will be hoping he makes the difference against Pune and extend their lead atop the table to five points.